Has #MeToo Gone Too Far

Update Required To play the media you will need to either update your browser to a recent version or update your Flash plugin.
By Ashley Thompson
19 January, 2018

But this week, there has been talk of the possible harm the movement may cause.

The discussion began after the publication of a story about a woman identified only as "Grace." The website Babe.net published the account. "Grace" told of her 2017 encounter with comedian Aziz Ansari. The article suggested that Ansari should be included in the growing list of abusive men in entertainment. 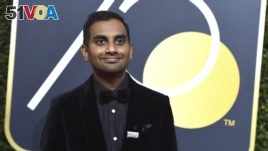 Yet many readers -- both women and men -- believe the woman's encounter was simply an example of a bad date and a bad sexual experience.

Ansari has said he apologized immediately after the woman told him about her discomfort during the encounter. He said he believed the sexual experience was consensual.

But his career may already be damaged.

Michael Cunningham teaches psychology at the University of Louisville in Kentucky. He said the Grace/Ansari encounter is an example of a misunderstanding between two people.

"It appears that Grace wanted Ansari to treat her as a potential girlfriend to be courted over multiple dates, rather than a pickup from a party engaging in a mutually acceptable transaction," Cunningham wrote in an email. "When he did not rise to her expectations, she converted her understandable disappointment into a false #MeToo."

Carole Lieberman is a psychiatrist in Beverly Hills, California. She said, "too many women have joined #metoo too quickly and unthinkingly."

"Though they may have wanted to be in solidarity with other women, the stories of dates gone wrong or women scorned have detracted from women who have been raped or seriously sexually assaulted," she said.

Online and in person, many women are talking about experiences similar to Grace's story -- encounters with men who seemed wonderful at first, but become aggressive, or even criminally abusive, when things became sexual.

Sarah Hosseini writes about sex. She said the #MeToo movement is big enough to include experiences such as Grace's.

"What she experienced with Ansari is not OK. But do we have language yet for intimate encounters that teeter on the edge of absolute sexual assault/abuse?" she asked. "I don't think we do."

Liz Wolfe is editor of Young Voices, an organization in Washington, DC that publishes opinion pieces written by young people.

Wolfe has noticed a generational divide in reactions. Older women seem to think Grace should have been more vocal and assertive, or simply left Ansari's apartment. Younger women feel that Ansari should have read Grace's body language and listened to her more closely, and he was at fault for pressuring her.

Among men, there are also many different views.

Tahir Duckett is with ReThink, a nonprofit seeking to stop boys and young men from committing sexual assault. He says the #MeToo movement "is exactly where it needs to be" as it continues to empower victims.

"This moment absolutely calls for a changed approach to dating," he said. "It means paying just as much attention to body language as we do to words."

However, Glenn Sacks, who writes often about men's issues, said the Ansari case supports his belief that #MeToo is including "trivial mistakes or misdeeds of the many in with the genuinely awful actions" of a few.

Warren Farrell has written such books as "Why Men Are the Way they Are" and "The Boy Crisis." He suggested that women should bear more of the responsibility for beginning sexual interest. And he recommended training in schools for both boys and girls to view relationship issues from the other's perspective.

Ashley Thompson adapted this story from the Associated Press. Hai Do was the editor.

encounter - n. a meeting that is not planned or expected

consensual - adj. agreed to by the people involved

mutually - adv. in an equal way for each person or group involved

scorn - v. to refuse or reject

detract - v. to reduce value, strength or importance of something

teeter - v. to move in an unsteady way back and forth