Update Required To play the media you will need to either update your browser to a recent version or update your Flash plugin.
By Bryan Lynn
19 July 2020


Scientists and engineers are preparing for possible travel into interstellar space, the area in between stars, in the distant future.

A new report examines the possible problem of changes in language on long space trips.

Experts believe it will likely take many years before the technology and equipment are developed to send humans to this unexplored area of space. But if it does happen, massive spaceships could carry humans on long trips to distant stars.

Two American researchers have explored one possible problem with such travel. They considered the possibility that changes in human language could develop over time and lead to major communication problems with people on Earth. 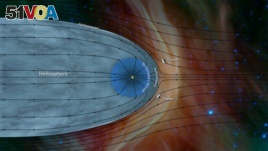 Data from the NASA spacecraft Voyager 2 has helped further characterize the structure of the heliosphere — the wind sock-shaped region created by the sun's wind as it extends to the boundary of the solar system, as depicted in this image released by NASA.

The language experts are professors Andrew McKenzie from the University of Kansas, and Jeffrey Punske, of Southern Illinois University. The two recently published a paper on the subject that appears in the European Space Agency's online publication Acta Futura.

The paper considers very long trips necessary to reach interstellar space, estimated to be about 18 billion kilometers from Earth. It also examines the possibility of future colonization of distant stars.

Languages naturally change as communities grow more isolated from each other, the researchers note in the paper. The long isolation of a community could lead to enough differences in language to make it impossible for community members back home to understand.

"If you're on this (spaceship) for 10 generations, new concepts will emerge, new social issues will come up, and people will create ways of talking about them," McKenzie said in a statement. Such vocabulary would become specific to only that spaceship.

"People on Earth might never know about these words, unless there's a reason to tell them. And the further away you get, the less you're going to talk to people back home," McKenzie said.

The researchers noted that in addition to new words being used, the language of people traveling on spaceships and living in colonies would experience many other changes.

For example, the sounds of different letters would likely change over time, affecting not only individual words, but the whole "grammatical system," the paper states.

The paper provides examples of how languages developed on our own planet because communities became isolated over time. Examples include "the Polynesian settlement of far-flung Pacific islands, and dialect development in relatively isolated European colonies."

McKenzie identified an example of a major language change on Earth during modern times. He described a way of speaking called "uptalk," when speakers end statements with a rising tone. He said this way of speaking is often mistaken for a question tone by those who are not aware of it. "Uptalk has only been observed occurring within the last 40 years, but has spread from small groups of young Americans and Australians to most of the English-speaking world," McKenzie said.

The researchers say one possible solution to limit communication problems would be to include language experts on spaceship crews. Another suggestion is to use sign language as a form of communication.

McKenzie added that space travelers might question whether it is even worth trying to learn how to communicate with people on Earth. But he believes there will always be a need, even if it is very limited. "You have to learn a little Earth English to send messages back, or to read the instruction manuals and information that came with the ship," he said.

Bryan Lynn wrote this story for VOA Learning English, based on reports from the University of Kansas and Acta Futura. Mario Ritter, Jr. was the editor.

isolate – v. separate someone or something from other people or things

concept – n. an idea or principle

vocabulary – n. all the words in a particular language

dialect – n. a form of language people speak in a particular part of a country

tone – n. the quality of a sound

manual – n. a book that contains directions for doing something