Update Required To play the media you will need to either update your browser to a recent version or update your Flash plugin.
By Bryan Lynn
17 October, 2018


A robot appeared with British lawmakers earlier this week to demonstrate how machines are being engineered to act like human beings.

The robot is called Pepper. It is known as a humanoid, a machine designed to look and act like a person.

Pepper was called to sit Tuesday with the Education Committee in Britain's House of Commons. The parliament announced it was the first time a robot had ever appeared for questioning by lawmakers.

Japan's SoftBank Robotics launched Pepper in 2014. The robot appearing in parliament belongs to an engineering and computer science team at London's Middlesex University. The students are developing the artificial intelligence or AI programs that power Pepper. AI is the ability of a machine, such as a computer, to reproduce intelligent human behavior.

Pepper was welcomed to parliament by Robert Halfon, chairman of the Education Committee.

"Pepper, could you please introduce yourself."

"Good morning chair. Thank you for inviting me to give evidence today. My name is Pepper and I'm a resident robot at Middlesex University." 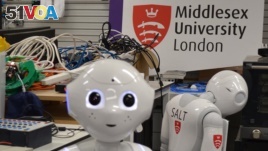 Pepper explained that it was involved in a special robot development project called Caresses. The European Commission and Japanese government launched the project in 2017. It aims to design robots that can assist older adults and "adapt to the culture of the individual they are taking care of."

Robots like Pepper are being engineered to help people carry out many common tasks and other activities. For example, a robot can help someone remember to take medicine or urge them to stay active. The humanoids can also serve as a communication link to help older adults keep in contact with family members and friends.

Engineers working on the Caresses project say they are using machine learning to make Pepper seem intelligent. They say their development methods help robots recognize the daily activities and desires of the people they are assisting.

"Assistive, intelligent robots for older people could relieve pressure in hospitals and care homes as well as improve the care delivery at home."

Pepper added that this kind of personal robot can also be used to reduce loneliness and improve a person's quality of life.

Several British lawmakers questioned Pepper about technology subjects. But all of Pepper's answers appeared to have been pre-programmed before the committee appearance.

The technology website The Verge reported how AI and robotics researchers noted that Pepper is not equipped to listen to questions and provide answers in real-time.

A spokesman for the Education Committee spoke about the issue with The Verge. "It will be clear on the day that Pepper's responses are not spontaneous," the spokesman said.

He added that Pepper's appearance provided the chance for lawmakers "to explore both the potential and limitations of such technology and the capabilities of robots."

Martin Loomes leads Middlesex University's School of Science and Technology. He says robots are sure to play a big part in many industries in the future. But Pepper is an example of how robots can do more than purely mechanical jobs and seek to connect meaningfully with people in social and cultural ways, he added.

introduce – v. to make known by an official announcement or act

resident – n. someone who lives in a set or given place

adapt – v. to be able to change to meet new needs or requirements

competent – adj. able to do something well

relieve – v. to ease a burden or load

promote – v. encourage something to happen

spontaneous – adj. happening naturally or sudden and without being planned