Update Required To play the media you will need to either update your browser to a recent version or update your Flash plugin.
By Bryan Lynn
11 September, 2018


Weather officials are predicting a powerful storm in the Atlantic Ocean will hit America's southeastern coast later this week.

Hurricane Florence, a Category 4 storm, is expected to make landfall in North or South Carolina late Thursday or early Friday. Officials have said the hurricane could further strengthen as it continues to move toward land.

More than a million people living in the storm's predicted path have been ordered to leave the area. U.S. President Donald Trump has already signed declarations of emergency for both North Carolina and South Carolina.

States of emergency have also been declared by governors in both Carolinas, as well as Virginia and Maryland. 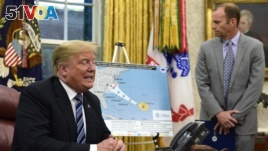 Several large hurricanes have struck areas further south, including Florida. That state has had at least five hurricanes of Category 4 or stronger during the past 100 years. In 1992, Hurricane Andrew caused widespread damage in Florida as well as neighboring Louisiana.

Hurricane Katrina was a deadly hurricane that hit the U.S. Gulf Coast in 2005, causing widespread damage in Louisiana. The most recent Category 4 in the U.S. was Hurricane Harvey, a deadly storm that struck Houston, Texas.

Harvey was especially severe because of the massive flooding it caused. Weather systems had kept the storm over one area much longer than most hurricanes, resulting in huge amounts of rain.

Weather experts have predicted Hurricane Florence could also produce massive rainfall if it remains over one area for a long time.

Jeff Weber is an atmospheric scientist with the University Corporation for Atmospheric Research in Boulder, Colorado. He spoke to VOA about the current storm.

"I know the people in the Carolinas are no stranger to tropical storms. But this is certainly going to be one of the larger - if not one of the largest - to make impact along their coastline."

Weber says Hurricane Florence is being affected by something called the Bermuda High. This is a high pressure system sitting over the Atlantic territory of Bermuda. It normally keeps storms moving in the direction of Florida or the Gulf Coast.

But this time is different.

Weber says in addition to the Bermuda High, another high pressure system is expected to keep Florence from quickly heading back out to sea. This is why the storm is predicted to stay in one spot and drop heavy rain, as Hurricane Harvey did.

"It's going to be kind of stuck and pinned up against the coast for two to three days. Some of the forecasts have as much as 36 inches of rain falling in parts of North Carolina."

Weber says this kind of stuck storm can stay strong and keep drawing water in from the ocean and dropping it in the form or rain. If this happens, major flooding can affect large areas in several states.

"I would have concerns if I was anywhere near North Carolina, southern Virginia or even the Chesapeake Bay. Even Maryland and Delaware will be, I think, strongly impacted."

Some weather experts believe there is a link between such severe storms and climate change. But Weber says there is not enough current evidence to make a clear case.

"What we do see is we are into a warmer environment where we have warmer atmospheres and warmer oceans that gives the the potential for these storms to become more powerful, because that's exactly what they use for their fuel."

Weber says Hurricane Harvey and Hurricane Florence may be demonstrating that this new kind of storm will happen again and again, causing more severe flooding over much larger areas.

Category 4 – n. The Saffir-Simpson Hurricane Wind Scale is a 1 to 5 rating based on a hurricane's sustained wind speed

forecast – n. prediction about what is expected to happen

impact – n. the effect a person, event, or situation has on someone or something

pinned – adj. held firmly in a certain position so as not to be able to move

pattern – n. particular way that something is often done or repeated

potential – adj. having or showing the capacity to become or develop into something in the future.