Update Required To play the media you will need to either update your browser to a recent version or update your Flash plugin.
By Bryan Lynn
10 June 2020


America's IBM has ended its facial recognition business and raised concerns about how police forces might be using the technology.

Facial recognition systems are designed to identify individuals in photo databases or from video surveillance.

Facial recognition accuracy has greatly improved in recent years. The technology is used by police in several major cities and by some U.S. government agencies. Privacy groups and civil rights activists have criticized such use of the technology.

Several studies have shown the technology can have difficulties correctly guessing a person's race or sex. Critics say such failures could violate a person's civil rights. Activists have also warned that facial recognition systems could be used for mass surveillance of citizens. 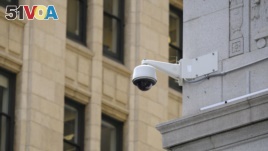 In this photo taken Tuesday, May 7, 2019, is a security camera in the Financial District of San Francisco. (AP Photo/Eric Risberg)

IBM's CEO, Arvind Krishna, announced his company's decision on Monday in a letter to U.S. lawmakers. He said IBM would stop offering facial recognition software and end all research and development of the technology.

Krishna said IBM strongly opposes the use of any facial recognition technology to be used for "mass surveillance, racial profiling" or "violations of basic human rights and freedoms."

Krishna wrote that responsible use of the technology "can increase transparency and help police protect communities." But he added, it "must not promote discrimination or racial injustice."

Ongoing protests across the United States have raised new questions about racial injustice and the use of technology by police to carry out surveillance on demonstrators and American neighborhoods.

The protests, which started after the death of George Floyd, have centered on police violence and racial inequality in America.

Floyd, a 46-year-old black man, died on May 25 after a white police officer in Minneapolis, Minnesota, kneeled on Floyd's neck for nearly nine minutes. The incident was caught on video.

Krishna wrote this week, "We believe now is the time to begin a national dialogue on whether and how facial recognition technology should be employed by domestic law enforcement agencies."

In the past, IBM had tested its facial recognition software with the New York Police Department.

Krishna sent his letter to a group of Democratic congressmen who have been working on police reform legislation fueled by the mass protests over Floyd's death. The reform bill could include restrictions on police use of facial recognition technology.

Microsoft and Amazon have also developed facial recognition systems. However, Microsoft has joined critics in calling for restrictions on the use of the technology by government agencies.

Clare Garvie is a researcher at Georgetown University's Center on Privacy and Technology in Washington, D.C. She told The Associated Press that many U.S. law enforcement agencies use facial recognition software built by lesser-known companies. These include Japan-based NEC and European companies Idemia and Cognitec.

A smaller number of law enforcement agencies have partnered with Amazon, which has received strong criticism from privacy activists since it introduced its Rekognition software in 2016.

Bryan Lynn wrote this story for VOA Learning English, based on reports from The Associated Press, Reuters, IBM and Microsoft. Ashley Thompson was the editor.

racial profiling – n. to form an opinion about a person based on their skin color or ethnic background

kneel – v. to put one or both knees on the ground

domestic – adj. inside one country and not international