Update Required To play the media you will need to either update your browser to a recent version or update your Flash plugin.
By Bryan Lynn
05 February, 2019


People flying into India's southern city of Cochin may see numerous solar panels around Cochin International Airport. But they may not know that the airport was the first in the world to be fully powered by solar energy.

A sea of shiny solar panels stretches across land running next to the airport's main road. Many more panels sit on top of a massive parking structure. All are capturing valuable sunlight that is changed to energy to power all airport operations.

The project began five years ago when airport officials were looking for new ways to reduce ever-increasing electricity bills.

The airport's director, V.J. Kurian, says they came up with the solar idea and decided to begin with a small experiment.

"We put solar panels on the rooftop of Terminal One. We observed it for a year and we found it is quite good and can be safely scaled up," Kurian told VOA.

This success led to further expansion of solar operations at the airport. 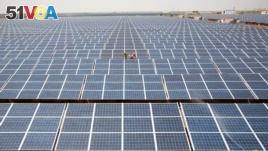 In this file photo, workers install photovoltaic solar panels at the Gujarat solar park under construction in Charanka village in Patan district of the western Indian state of Gujarat, India.

In 2015, Cochin officials declared that the airport had become the world's first to be fully powered by solar energy.

Today, tens of thousands of solar panels produce more than enough power to keep the airport running 24 hours a day. Airport officials say any leftover energy the airport does not need is stored in the city's general energy grid.

Kurian says, in the beginning, there were concerns about whether the new system made financial sense.

At the time, the cost of producing one megawatt of power was estimated to cost $1 million. But the falling price of solar panels in recent years greatly lowered the costs and helped make the project a reality.

"We get back our investment in less than six years time," Kurian said. "Which I thought was an excellent investment opportunity - and the next 25 years is meant for all profit."

Last year, the airport won one of the United Nations' top environmental honors: the Champions of the Earth award for Entrepreneurial Vision. The project is one example of recent efforts by officials in India to increase the use of solar power to reduce its carbon emissions.

The solar expansion at Cochin has led additional airports and other kinds of building projects to explore the possible use of solar energy.

To keep its standing as the world's only fully solar powered airport, the facility has continually expanded its energy operations. Officials say the current production level of about 29 megawatts will soon grow to nearly 40 megawatts. The increase will be necessary to keep up with ever-growing passenger traffic.

Airport officials have estimated the amount of carbon emissions to be reduced over the next 25 years would be equal to planting about 3 million trees. And to make the project even greener, vegetables are being grown under the solar panels and on other available land.

Last year, about 60 tons of vegetables were produced and sold.

Anjana Pasricha reported this story for VOA News. Bryan Lynn adapted it for VOA Learning English. Hai Do was the editor.