Update Required To play the media you will need to either update your browser to a recent version or update your Flash plugin.
By Dan Friedell
19 April 2021


Imagine the World Cup in 2022 without many of the world's best soccer players.

Two of world soccer's most powerful organizations are angry with 12 major European soccer clubs and are threatening to ban their players from the World Cup. 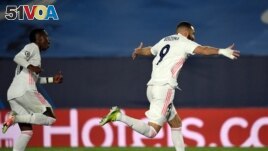 The 12 clubs want to set up their own organization of teams in a league they are calling the Super League. But Europe's main soccer body, UEFA, and international soccer's main governing body, FIFA, do not approve of the idea. They are considering banning players from the next European championship and the World Cup if their teams go ahead with plans to form the Super League.

One of the teams is England's Manchester City. That team has players from the national teams of England, Spain, France and Germany.

Others that plan to join the new league include Chelsea, Manchester United, Tottenham and Arsenal in England; Real Madrid and Barcelona in Spain; and Juventus and A.C. Milan in Italy. They are among the most famous soccer teams in the world and have players from all over. Teams from France and Germany have not yet announced plans to join.

While 12 teams have already agreed to form the Super League, the organization hopes to start with 15 and then have a total of 20. The goal would be to play in a tournament that is similar to UEFA's Champions League. The Champions League final is one of the most popular sporting events in the world each year. Soccer fans from all over the world watch the game on television.

Real Madrid's president, Florentino Perez, will be the first leader of the new league. It is financially supported by U.S. bank J.P. Morgan, which offered the teams about $4 billion. The announcement worried both leaders of European soccer and European political leaders.

UEFA is led by Aleksander Ceferin. He said he plans to ban both the teams and players from his organization's competitions. That would include both the Champions League and the upcoming Euro 2020 competition. The Euro 2020 will last for a month starting on June 11. It was postponed from last year because of the COVID-19 pandemic.

Earlier this year, international soccer's governing body, FIFA, said players could be banned from the 2022 World Cup and said Sunday it "disapproved" of the Super League.

The British Prime Minister Boris Johnson said he wants to stop the league in its current form. The leaders of France and Italy also expressed concerns.

The Super League clubs wrote a letter to UEFA's Ceferin and FIFA President Gianni Infantino. It said the new league wants to "compete with and exist alongside" the other tournaments.

Why a new league?

One of the reasons the teams started the Super League is so they do not have to compete for the right to be in the Champions League. The current year's Champions League competition is made up of the top teams from the year before. If a famous team, like Manchester United, has a bad season, it will still be guaranteed a spot in the Super League.

Ceferin said the Super League is only about money. He argued UEFA is different because it develops soccer by giving money to teams all over Europe.

The Super League news comes just a day before the start of a meeting between UEFA officials. In the meeting, they were expected to announce the expansion of the Champions League.

Dan Friedell adapted this story for Learning English based on reporting by the Associated Press and Reuters. Mario Ritter, Jr. was the editor.

Would you still watch the Champions League if the Super League starts? Tell us in the Comments Section and visit 51VOA.COM.

club –n. a sports team or organization; often used to refer to professional teams in Europe