Update Required To play the media you will need to either update your browser to a recent version or update your Flash plugin.
By VOA
09 June, 2018


Luyanda Mdanda is someone who likes to be busy.

The 19 year-old South African led a very active life long before becoming an international student in the United States. Born in Johannesburg, he enjoys outdoor activities, such as playing a game of golf and surfing.

But Mdanda says he never thought his life could be as busy as it has been since coming to the University of California San Diego in 2016.

The University of California San Diego, or UCSD for short, was established in 1960. It is about a two-hour drive south of Los Angeles on the California coast. The school is a public research university, and currently serves over 36,000 students. 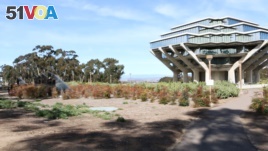 The Geisel Library at the University of California San Diego.

UCSD is well known for its research programs. Several researchers, professors and former students have been recognized for their work. They have won major awards, including the National Medal of Science, the Fields Medal and the Nobel Prize. And that is why Mdanda wanted to earn his undergraduate degree at UCSD. He learned of the school through a State Department program called EducationUSA.

Mdanda chose to study cognitive science, which combines different subjects, such as computer science, psychology and social science. He knows that, by choosing this study program, he is required to learn many different skills. But he feels it is the best way of solving the world's biggest problems.

However, getting the chance to work on these sorts of problems was not easy, Mdanda recalls. UCSD does not provide him with financial aid. So he has asked several South African companies to donate money to help pay for his college education. It also means he has had to work very hard on his own.

"That's really pushed me to seeking internship opportunities, seeking campus jobs, seeking other opportunities to find people who are willing to support me. And I think if it wasn't for that challenge I wouldn't have to necessarily push myself as hard as I have in the past."

Mdanda has worked three jobs since starting classes at UCSD. But luckily for him, these jobs have involved work he finds interesting.

The school is home to the San Diego Supercomputer Center, which houses very large, very powerful processors. And Mdanda was able to get a position in the center as an undergraduate researcher.

Many of the world's top technology companies operate their own supercomputers. Last summer, Mdanda put what he learned in his research position to use by getting a paid internship at the Microsoft Corporation. And he will be returning to the company for another internship this summer.

But it is at yet another job that Mdanda truly seems to shine. In 2017, he became a resident assistant, or RA for short. At most U.S. colleges and universities, many students live on-campus in school-operated student housing. In exchange for a free place to stay, students chosen as RAs act as a representative of the school in the student housing. They make sure students follow rules and have a safe and welcoming environment to live in.

RAs also can act as a guide to other students, something which Mdanda says he loves doing. He personally is involved in several student organizations, including a group that helps students develop business ideas. And so he loves helping others, telling them all about campus life and the groups in which they can be involved. That way they can get the most out of their time at UCSD, he adds.

Getting the most out of life is exactly what brought 32 year-old Olesia Altynbaeva to UCSD. Altynbaeva is from Nizhnevartovsk, in Eastern Russia. She earned her undergraduate degree at the opposite end of the country. She received her degree from the Saint Petersburg State Chemical Pharmaceutical Academy in 2011.

Yet Altynbaeva knew she would have to travel even further to learn and experience everything she felt the world had to offer her. So she began looking for schools where she could earn a graduate degree in business administration. California's many technology companies and mild weather led to her to decide to continue her education overseas. She began attending UCSD in 2017.

UCSD's Rady School of Management chose Altynbaeva for a fellowship, meaning the school agreed to pay the full cost of her education. So unlike Luyanda Mdanda, she does not have to be as concerned about money and has more free time.

But from the beginning, she says, she had to face a different kind of issue: having many more things to do than she has time for.

"The university gives you so many nice opportunities. They organize different social events ... as well as workshops where you can learn something more in addition to your program. ... So for me it was a challenge to ... find time for each activity that I really enjoy ... and ... stay on track with my MBA program."

It has taken Altynbaeva time, but she says that she has been able to organize her time better. She says the important thing has been to decide which activities are the most helpful for her education and career, and which are the most fun. Then she can decide the best uses of her time.

Altynbaeva really likes the activities that relate to her field of study. For example, she has helped organize a student group, called the Design Innovation Club, which is interested in design-based thinking.

Also, she says she loves San Diego's warm weather, much more than the cold weather of the part of Russia called Siberia, where she grew up. So, like many UCSD students, she spends much of her free time doing outdoor activities, like swimming.

Both Olesia Altynbaeva and Luyanda Mdanda agree that, in the end, it does not really matter what one's interests are. For them, life as an international student in the United States means always having something worth doing.

We want to hear from you. What sort of activities are available to college and university students in your country? How do you make the most out of your time? Write to us in the Comments Section or on 51VOA.COM.

surfing – n. the activity or sport of riding ocean waves on a special board

undergraduate – n. describing a degree that is given to a student by a college or university usually after two to four years of study

cognitive – adj. of, relating to, or involving conscious mental activities, such as thinking, understanding, learning, and remembering

internship – n. a position as a student or recent graduate who works for a period of time at a job in order to get experience

graduate degree – n. a degree that is given to a student by a college or university usually after one or two years of additional study following a four-year undergraduate degree

workshop(s) – n. a class or series of classes in which a small group of people learn the methods and skills used in doing something