Update Required To play the media you will need to either update your browser to a recent version or update your Flash plugin.
By Jonathan Evans
21 July, 2019


Years of political and economic unrest in Venezuela have destroyed much of the country's independent media.

A lack of money from advertising, as well as battling government control of the newspaper industry, forced many newspapers to go online to survive. 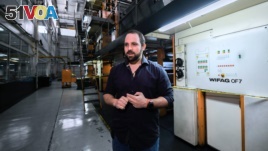 FILE - The General Manager of Venezuelan newspaper El Nacional Jorge Makriniotis speaks during an interview with the AFP, at its printing press in Caracas, June 14, 2019.

"It was a course we couldn't get away from," Jorge Makriniotis told AFP. He manages the 75-year-old El Nacional newspaper.

The newspaper ran its final paper-based edition last December. Like many other former print media, it is now only available on the internet.

In 2013, Venezuela's government created a state-run company to control the import and distribution of paper.

The move created an environment that favored pro-regime media, says Carlos Correa. He is director of the non-governmental organization Espacio Publico. Correa adds that since 2013, 58 daily newspapers have ended circulation.

The national union of press workers has condemned a "systematic policy" that forced dozens of independent radio and television stations to close.

U.N. High Commissioner for Human Rights Michelle Bachelet wrote a report on Venezuela earlier this month. In the report, she said the government has attempted to control the country's media by "enforcing its own version of events and creating an environment that curtails independent media."

In 2018, El Nacional lost a legal case brought by Diosdado Cabello. Cabello is widely considered the most powerful person in Venezuela's government after President Nicolas Maduro. He brought a legal case against the newspaper for publishing drug-trafficking charges made against him in the Spanish press.

The economic crisis has had a major effect on the media as well. Five years of recession and widespread inflation have destroyed advertising profits. The International Monetary Fund expects inflation in Venezuela to reach 10 million percent this year.

The move to online publication has not solved the many problems independent media face. One basic problem is being able to reach readers.

Many readers have trouble loading webpages because of power outages, undependable internet and slow connectivity.

Still, some reporters have launched new media directly on the internet, such as El Pitazo. The award-winning newspaper supported itself through a 2017 crowdfunding campaign, its director Cesar Batiz told AFP.

However, in the past two years, El Pitazo has come under cyberattack four times.

Before the first attack in 2017, the El Pitazo website had 110,000 visits a day. Since then, the number of visits dropped by more than 50 percent. And 65 percent of those visits come from outside Venezuela.

Jonathan Evans adapted this story for Learning English based on an AFP report. Ashley Thompson was the editor.

course – n. the path or direction that something or someone moves along

curtail – v. to reduce or limit something