US Inventor’s Battery Could Change the World… Again

Update Required To play the media you will need to either update your browser to a recent version or update your Flash plugin.
By Bryan Lynn
03 May, 2017

Goodenough actually co-invented lithium-ion batteries in 1980. This eventually led to a revolution in the electronics industry because those devices were smaller and provided more electricity than other fuel cells.

Sony Corporation was the first business to commercially develop the lithium-ion technology.

In 1991, Sony launched worldwide sales of lithium-ion batteries. They enabled the company to start producing small video cameras and other devices that soon became very popular. The same technology is still used today to power most personal devices.

Now, John Goodenough is 94-years-old. He continues working as an engineering professor at the University of Texas in Austin.

Goodenough recently announced what he believes is another major development in battery technology. He and his engineering team have produced the first-ever solid-state battery cells. He hopes this latest invention will shake up the electronics world.

Researchers say the new, solid-state batteries can hold more power, charge faster, and do not get as hot as ones currently in use. They have at least three times as much energy density as today's lithium-ion batteries, notes Goodenough.

He said the main difference between the old and new technology is that the latest battery cells use parts made of glass, instead of liquid.

"I was trying to improve the lithium-ion battery that you use in your cell telephone that has several problems," Goodenough said, explaining how he made the discovery. He said a big problem with liquid parts is they can catch fire under some conditions.

John Goodenough said his latest discovery also has the possibility to solve many other problems with current batteries. These include cost, energy density, rates of charge and discharge and battery life.

While his first invention helped start a wireless revolution, he hopes the latest one will help support many forms of sustainable energy.

The goal is to use the new batteries to store energy produced by renewable sources, such as the sun and wind. This energy could then be used to run electric vehicles or to provide power for homes. 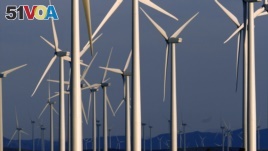 In this file photo, a wind turbine farm owned by PacifiCorp near Glenrock, Wyoming, cranks out electricity, May 6, 2013.

"A rechargeable battery is the most convenient way to store electric power. It can be stored either as stationary storage for the (electrical) grid, or it can be stored in portable batteries for electric cars and for many other applications."

Goodenough is a big supporter of electric-powered cars. He first got interested in them during America's energy crisis in the 1970s. But one of the major issues slowing their development over the years has been the lack of powerful, low-cost, long-lasting batteries.

He believes his new technology can provide major improvements for electric cars in the future. He said the current vehicles have a long way to go to meet the high demands of drivers.

"They'd like to have a car that would be as convenient as your modern car, have a bigger driving range. You'd like to able to charge it very quickly – maximum 10 minutes. They would like it to be no more expensive than your present car is. At the present moment you're just not quite able to reach that goal. And I'm hoping that what we've developed will allow us to reach that goal."

John Goodenough said he believes there is great potential for his new batteries to be widely used in phones and other personal devices. But to be truly successful, the technology will also have to effectively compete with energy that comes from fossil fuels. Reducing the use of oil can greatly lower energy costs and cut air pollution and climate change, he added. 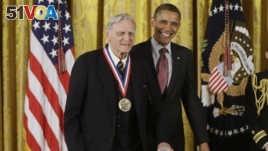 President Barack Obama awards the National Medal of Science to Dr. John Goodenough of the University of Texas, Friday, Feb. 1, 2013, during a ceremony in the East Room of the White House in Washington.

Goodenough has received many awards for his work, including the National Medal of Science from President Barack Obama in 2011. But he has not gotten rich from any of his discoveries.

"I've never made any money from the inventions we had, the lawyers have always taken all the money. And I'm too old to worry about it, nor did I ever worry about it too much. As long as I had a job, that's all I needed to keep me with a roof over my head and eating, and an opportunity to work."

His team has asked the U.S. Patent and Trademark Office for legal rights to the technology. The invention is considered intellectual property owned by the University of Texas at Austin's Cockrell School of Engineering. The university plans to oversee efforts to offer the technology to companies that will keep developing it.

Goodenough gives much of the credit for his success to the people around him. "I'm very happy to have nice people to work with. You don't do anything alone, you do it with people," he said.

Most scientists would feel very lucky to get just one major breakthrough during their lifetime. Goodenough said he feels thankful that he now has a second chance. But at age 94, he said he's not sure how many more of these he will get.

"If the good Lord brings things together and I'm the right man at the right time, well who knows what can happen? You can't predict."

commercially – adv. related to the buying and selling of goods

solid-state – adj. of or relating to the use of the electric or magnetic properties of solid materials

density - n. amount of something in a particular space or area

convenient – adj. easy to use

grid – n. system of electrical wires and equipment to supply electricity to a large area

fossil fuels – n. a fuel (such as coal, oil, or natural gas) that is formed in the earth from dead plants or animals

intellectual property – n. something (such as an idea, invention, or process) that comes from a person's mind

breakthrough – n. a sudden development, especially one involving knowledge or a process