Update Required To play the media you will need to either update your browser to a recent version or update your Flash plugin.
By Carolyn Nicander Mohr
27 September, 2017


Last week Apple released iOS 11, the update to its mobile operating system for iPhone and iPad. This update has features that may make your current device feel like a new one.

Warning: You will lose your older apps in iOS 11

You may be excited to download iOS 11 right now, but be careful.

As predicted, older apps will not work with iOS 11. If you try to open an older app, you will see a warning sign:

So if you have any older apps you need, do not yet update to iOS 11.

iOS 11 has dozens of new helpful features. These are some of the ones you may find most useful. 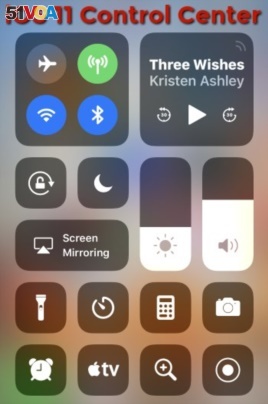 Control Center is a handy hub to help you control your iPhone or iPad with fewer swipes and taps. By swiping up from the bottom of your screen, you can open Control Center to quickly use controls such as volume and brightness without having to hunt through apps.

Control Center is even handier in iOS 11. You have more control of what you want to include in Control Center.

You can choose from the standard controls, such as camera and calculator, or add some new ones, such as Magnifier, Apple TV remote, and alarm.

See How to Use Your Phone as a Magnifying Glass

You can also add some of the new features in iOS 11 to Control Center, such as Do Not Disturb While Driving and Screen Recording.

Control Center is now all on one page. You can see what music is playing on Control Center without having to swipe to a new page.

The volume and brightness controls also have wider slider buttons to make them easier to control.

Do not disturb while driving 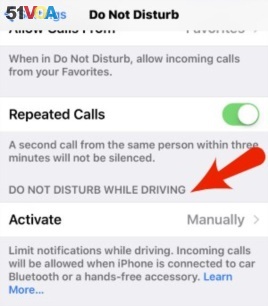 Do Not Disturb While Driving Settings

Apple addresses the issue of distracted driving with one new feature. The Do Not Disturb While Driving control may save lives.

This feature blocks notifications. Your screen stays dark with Do Not Disturb While Driving turned on. However, if you have Bluetooth in your car, your phone calls will still ring.

You can opt to have an automatic reply message sent to someone who is trying to reach you. You can tell them that you are driving and will get back to them when you arrive; or any other message you want to send in an automatic reply. You can also choose a group of people who will get this message, such as Favorites.

If people need to reach you in an emergency, they can mark their message as urgent.

To turn on Do Not Disturb While Driving, go to Settings, then Do Not Disturb, then Activate. You can choose whether to turn this on manually, automatically, or when connected to your car's Bluetooth.

You will see a countdown of three seconds. That will give you time to get to the screen you want to record.

A red bar will appear at the top of the screen while it is recording. Tap the red bar when you want to end the recording.

The video will appear in your Photos app. 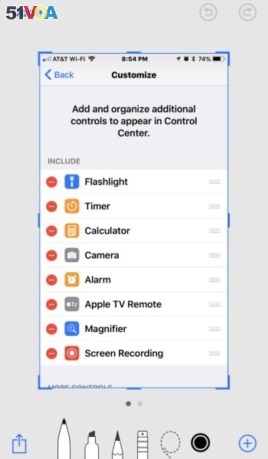 Tap on the screenshot thumbnail to edit the image.

After you are finished editing, tap "Done." You can save and share the image.

iOS 11 gives people better control of their files. iPhones and iPads will seem more like computers with iOS 11. Users can view files, and drag and drop them in other places.

iOS 11 adds a Files app. By using the Files app you can see your files in the Cloud without having to switch apps. The Files app lets you control files from iCloud and third-party services such as Google Drive and Dropbox.

Trust that the feature works. Do not test it. Police have reported iPhone owners trying out the new feature and blocking emergency lines in the process.

Have you ever been over to a friend's house and wanted to log onto their Wi-Fi network? iOS 11 can get you connected with ease.

Just hold your iPhone or iPad close to a device or Mac computer that is signed into Wi-Fi. If that person has you in their Contacts list, they will be asked if they want to let you sign into the network. Once they agree, you are in. 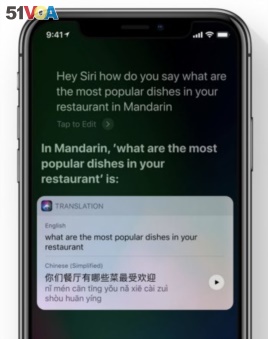 Siri is smarter now, and can translate English phrases into French, German, Italian, Mandarin and Spanish. Siri will say the translated phrase, so you can learn how it is pronounced. Siri will also show you the written translation.

Apple Maps has been improved too. Now, the app can show the insides of some malls and airports.

iOS 11 helps guide you in deleting apps you rarely use to make more space on your phone. You can have your iPhone or iPad automatically delete apps you have not used in a while.

If you change your mind, you can download the app again from iTunes, if it is still available. 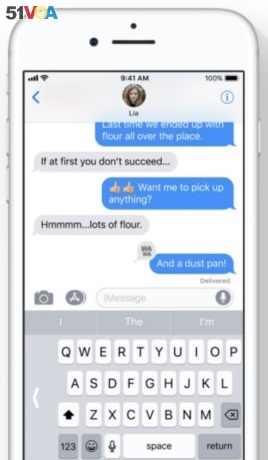 Apple is making it easier to type with one hand on a new keyboard layout. Go to Settings, then General, then Keyboard, then One Handed Keyboard. Choose either Off, Left or Right.

You can use the keyboard by pressing the globe button. The keyboard will be smaller and moved to the left or right. Tap the arrow on the side to return to the full-sized keyboard.

You can now scan documents into the Notes app where you can sign them and send them back.

To scan a document, open the Notes app and tap on the plus sign in a note. You will be given a choice of scanning a document. After you have scanned the document, you can sign it in the Notes app, then share it.

Have you downloaded iOS 11 yet? What are your favorite features of iOS 11? Are you waiting to download iOS 11 because you will have some apps that will not work with it?

hub - n. the central and most active part or place

manual - adj. operated or controlled with the hands or by a person

screenshot - n. an image of the data displayed on the screen of a computer or mobile device

thumbnail - n. a very small copy of a larger picture on a computer

Cloud - n. the large computers (called servers) that you can connect to on the Internet and use for storing data

phrase - n. a group of two or more words that express a single idea

globe - n. an object that is shaped like a large ball with a map of the world on it