Update Required To play the media you will need to either update your browser to a recent version or update your Flash plugin.
By Jim Dresbach
25 March, 2016


Iran has defended its recent launch of ballistic missiles in a letter written to the United Nations. 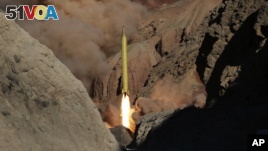 In this photo obtained from the Iranian Fars News Agency, a Qadr H long-range ballistic surface-to-surface missile is fired by Iran's powerful Revolutionary Guard, during a maneuver, in an undisclosed location in Iran, Wednesday, March 9, 2016.

Gholamali Khoshroo, Iran's United Nations ambassador, wrote to the U.N. on March 23 that Iran did not violate the resolution.

Khoshroo said there is no basis for raising the issue with the U.N. Security Council in the letter. Council members met March 14 at the request of the U.S. to discuss the missile launch.

Samantha Power, United States Ambassador to the United Nations, called the launches "dangerous, destabilizing and provocative" and "undermine the prospect for peace" in the Middle East.

Iran continues to insist its nuclear activities are for peaceful purposes, according to multiple media organizations. Some members of the U.S. Congress have asked for more sanctions against Iran.

"Iran is developing a nuclear program, so that they can put it on top of a ballistic missile ...," Republican Senator Cory Gardner of Colorado told VOA just days after the launch.

warhead – n. the part of a missile that contains the explosive

resolution – n. a formal statement that expresses the feelings, wishes, or decision of a group

destabilizing – v. to cause something to be unable to continue existing or working in the usual or desired way