Update Required To play the media you will need to either update your browser to a recent version or update your Flash plugin.
By Mario Ritter
08 January, 2018


The president of Iran says recent anti-government protests were not only about the economy but also the country's political leadership and issues of individual freedoms.

President Hassan Rouhani said on Monday that he thought the Iranian "people had economic, political and social demands."

Rouhani suggested that protestors disapproved of Iranian officials who opposed greater individual freedoms at home and closer ties with the West.

The president said people should be permitted to criticize all officials without exception.

"No one is innocent, and people are allowed to criticize everyone," he said. 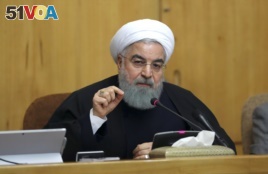 FILE - photo, released by official website of the office of the Iranian Presidency, President Hassan Rouhani speaks in a cabinet meeting in Tehran, Iran.

On Monday, he called for lifting restrictions on social media. Critics of Iran's government used social media during the recent protests. They were the largest demonstrations in Iran since 2009.

As the protests have weakened, the government has lifted restrictions on the social media app Instagram. But a more widely used messaging app, Telegram, was still blocked. The government said the restrictions would be temporary.

"People's access to social media should not permanently be restricted," Rouhani said. He added, "We cannot be indifferent to people's life and business."

Iran's Revolutionary Guards said on Sunday that security forces had put an end to the week of demonstrations. The group blamed foreign enemies for the unrest.

The protests began with young people and working-class Iranians angry over a lack of jobs and poor economic conditions. The protests spread to more than 80 cities and towns. Iranian officials say the unrest resulted in 22 deaths. More than 1,000 people were reported arrested.

Iran's deputy head of the judiciary Hamid Shahriari said all of the leaders of the protests had been identified and arrested. He said they would be firmly punished, with some possibly facing death sentences.

An Iranian lawmaker reportedly said on Monday that one of those detained had died. Iranian media reported that a 22-year-old young man had hanged himself in jail.

Many protestors expressed anger over Iran's foreign policy. Iran has been involved in conflicts in Syria, Iraq, and Yemen. It competes with Saudi Arabia for influence in the Middle East.

Iranians are also displeased with the country's financial support for Palestinians and the Shi'ite Muslim group Hezbollah in Lebanon.

They demand that the government deal with problems facing Iranians at home instead.

Mario Ritter adapted a report from the Reuters news agency for VOA Learning English. George Grow was the editor.

social media –n. forms of electronic communication through the internet

apps –n. (applications) a computer program designed to do a specific job or group of jobs

tolerance –n. the willingness to accept the activities or beliefs of others that are different from your own