Ireland Looks to Seaweed to Reduce Methane from Cows

Update Required To play the media you will need to either update your browser to a recent version or update your Flash plugin.
By Bryan Lynn
25 November 2021


Scientists in Ireland are collecting native seaweed to feed to cows and sheep to reduce the methane gas that the farm animals release.

Research has shown that seaweed fed to animals can cut the amount of the climate-warming gas they produce.

Ireland has Europe's highest per capita output of methane gas.

At the recent United Nations Climate Change conference in Scotland, Ireland joined a worldwide goal to cut output of methane gas by 30 percent by 2030.

Irish officials have said such reductions will mostly be reached through a 50 percent cut in non-agriculture methane. The country expects to reduce farm-related methane by 10 percent by 2030. 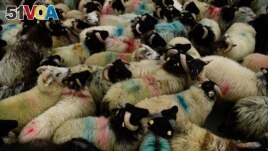 Sheep are herded at the Teagasc Agriculture and Food Development Authority in it's Mellows Campus in Athenry, Ireland, August 31, 2021. (REUTERS/Clodagh Kilcoyne)

The program aims to use seaweed additives in food to avoid having to reduce animal numbers to reach goals related to efforts against climate change.

About 20 different kinds of seaweed, most from Ireland's Atlantic coast, have been tested by researchers. Many other kinds have been collected by the project's partners in Norway, Canada, Sweden, Germany and Britain.

American and Australian scientists have already demonstrated the methane-reducing qualities of one seaweed, called Asparagopsis. Small amounts were added to animal feed in tests. But this kind of seaweed is not easy to grow in Northwestern Europe.

The Irish project aims to find native seaweeds within the country instead. But some researchers admit the local versions are not likely to reach the reduction in methane levels of over 80 percent shown with Asparagopsis.

"We have identified some brown seaweeds that are very positive and they're producing results," Maria Hayes told Reuters news agency. She is the project leader for the SeaSolutions project. The project team has reported methane reductions of between 11 and 20 percent in early tests.

Irish researchers are working on ways to bring the seaweed additives into the nation's farming system for cattle. Most cattle are mainly fed grass.

On one farm southwest of Belfast, treats are used to persuade cows to put their heads into a solar-powered machine that measures the level of methane on their breath. This same method will be used to test animals that have been fed seaweed additives.

Dutch chemical company Royal DSM produces a food additive that it says can cut methane release by about 30 percent. The company said it had received government approval in Brazil and Chile and is currently seeking approval in the European Union.

Not everyone is sure that such additives can help meet the latest climate change targets.

Sadhbh O'Neill is a climate policy and environmental politics expert at Dublin City University. She has been critical of industry attempts to depend on technology rather than to seek workable long-term goals for Ireland's agriculture industry.

"Scaling up these solutions takes time. We don't have time," O'Neill said.

Jenny O'Halloran harvests seaweed by hand on Inis Mór island, off Ireland's west coast. She told Reuters she thinks interest in the industry will keep growing.

"Maybe the future...is actually farming seaweed, which I think has to be part of the conversation when it comes to the future of seaweed in Ireland."

seaweed – n. a kind of plant that grows in the sea

per capita – adj., adv. by or for each person