Irish Voters to Decide Whether to Change Abortion Law

Update Required To play the media you will need to either update your browser to a recent version or update your Flash plugin.
By Bryan Lynn
23 May, 2018


Irish voters will decide on Friday whether to end the country's ban on abortion in most cases.

Voters will be asked in a referendum whether the country's constitution should be changed to remove current restrictions on abortion.

A constitutional amendment banned all abortions in Ireland in 1983. A change was made five years ago to permit abortions only in cases where the mother's life was in danger. Thousands of Irish women seek abortions each year in Britain, where they are legal.

If voters agree, the government will propose legislation to change the rules. Varadkar has said the legislation would permit women to have abortions with no restrictions up to 12 weeks into a pregnancy.

Recent public opinion studies suggest that there is more support for changing the existing law than for keeping it in place.

Campaigns on both sides of the issue grew intense leading up to the vote. Ireland is a majority Roman Catholic country. The Church opposes abortion. 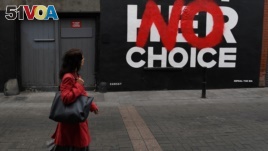 A woman walks past a new Pro-Choice mural by a graffiti artist collective called 'Subset' ahead of a 25th May referendum on abortion law, in Dublin, Ireland May 22, 2018.

Earlier this month, Prime Minister Varadkar criticized those opposed to abortion for some campaign advertising. His criticism centered on the use of images of people with Down Syndrome. Some ads had suggested that lifting current restrictions would lead to abortions of babies with the genetic disorder.

Facebook and Google have moved to restrict or remove ads relating to the vote. The companies said concerns were raised about influence from unknown sources.

Lawmaker James Lawless is a technology spokesman for Ireland's opposition Fianna Fail party. He told the Associated Press that there are no rules for political campaigning on social media in Ireland.

"Somebody at the moment can throw any amount of money, from anywhere in the world, with any message - and there's nothing anybody can do about it," Lawless said.

The issue of social media's role in elections has been raised in other countries as well. Facebook has admitted that Russian groups bought ads on its service in an effort to influence the 2016 U.S. presidential election. Several European nations have also accused foreign groups of trying to influence elections through social media campaigns.

Craig Dwyer is with Ireland's Transparent Referendum Initiative. The volunteer group was set up to collect information on ads being used to target Irish Facebook users.

Dwyer said the group had collected and examined nearly 900 Facebook ads connected to the referendum. Many were placed by registered lobby groups, and most were inside Ireland.

But many others could either not be traced or were from overseas. Dwyer said some were linked to U.S.-based anti-abortion organizations.

Bryan Lynn wrote this story for VOA Learning English, based on reports from the Associated Press, Reuters and Agence France-Presse. Mario Ritter was the editor.

referendum – n. election in which people in an area vote for or against an issue of public concern

lobby – n. an organized group of people who work together to influence government decisions that relate to a particular industry, issue, etc.

trace – v. find the origin of something

role –n. the part someone or something plays in an activity or a performance