Will Britain's Withdrawal from the EU Be the End of the World?

Update Required To play the media you will need to either update your browser to a recent version or update your Flash plugin.
By Susan Shand
04 August, 2018


Britain's withdrawal from the European Union (EU) is coming soon and so is the end of the world, if you believe the British newspapers.

Those reports tell of possible food shortages, grounded flights and troops sent to guard British streets if no agreement is reached.

Positions of both sides appeared to harden. British officials have said they are preparing for no deal on their country's withdrawal, also known as Brexit. They warned that it could affect European trade. 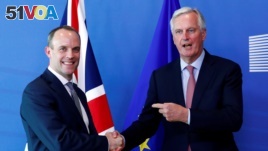 Prime Minister Theresa May said only that the government was preparing for every possibility.

All the warnings show the difficulty of finding a way to end trade ties that have developed since Britain became an EU member in 1973, explained Ben Fletcher. He is the director of the manufacturer's association EEF.

"We are attempting to reverse 40 years of integration in a four- to six-week negotiation," Fletcher said. "This is a degree of complexity like splitting the atom...We have to understand how hard that is."

More than two years after Britain voted to leave the EU, time is growing short. Britain is set to leave the EU on March 29, 2019. In order for EU countries to have time to approve any deal, both sides say they need to come to an agreement by October.

Without a deal, 40 years of free trade between Britain and Europe will end. This would lead to tariffs and border inspections that could delay shipments of everything from food and fuel to clothing and cars. In addition, Britain would no longer be a part of Europe-wide agreements that govern air traffic and prescription drugs.

Recent comments by Brexit Secretary Dominic Raab and Health Secretary Matt Hancock shocked people in Britain. The two men were speaking about the government's preparations for the withdrawal. Their comments led newspapers to write about trucks lined up for at international borders and travelers waiting for hours at passport control.

May said that while she expects to negotiate a deal that will let trade continue, the government is doing the right thing in preparing for "every eventuality."

"It is about making sure that we'll be able to continue to do the things that are necessary once we've left the European Union, if we leave without a deal," she said.

On Tuesday, British officials in Dover, released a report explaining how a no-deal Brexit would affect Europe's busiest port.

The report said there will be a line of trucks waiting to cross the English Channel, creating a gridlock as far as 65 kilometers inland. About 10,000 trade trucks pass through Dover on a busy day. That is one-sixth of Britain's trade in goods, with a value of $156 billion a year. Some 99 percent of those products moved through the port from other EU countries.

The drug company Sanofi has begun to keep more medicines and vaccines in Britain than usual as part of its planning for possible transportation delays after Brexit.

Ireland-based Ryanair, Europe's busiest airline, plans to add warnings on its tickets. The warning will say the company will not accept the ticket if Brexit causes flight problems after March 29.

Stories like this are too much for Brexit supporters like Marcus Fysh, a member of Britain's parliament from the governing Conservative Party. Fysh accused the government of trying to frighten people so they will accept a weaker agreement with the EU.

"That is irresponsible, and it should stop right now," he said. "And they should get behind Brexit, which people voted for."

Last month, Britain's government released its offer to the EU. The proposal would end free movement of labor and the rule of the European Court of Justice. It would, however, accept a customs union for trade in goods and agricultural products. The offer was quickly rejected by EU negotiator Michel Barnier. He said Britain cannot enjoy free trade with the European markets if it does not accept the EU's other policies.

Foreign Secretary Jeremy Hunt urged France and Germany to use their power with the European Commission to prevent a bad agreement.

"There is a real chance of no deal by accident," he told the Evening Standard. "Everyone is assuming, no, no, no, this will never happen. Well, actually, it could."

Danica Kirke reported this story for the Associated Press. Susan Shand adapted her report for VOA Learning English. The editor was George Grow.

reverse – v. to go in the opposite direction

gridlock – n. a situation in which streets are so full that vehicles cannot move