Update Required To play the media you will need to either update your browser to a recent version or update your Flash plugin.
By Susan Shand
07 December, 2017


The self-declared Islamic State (IS) group is close to defeat in Syria and Iraq.

Now, some observers say the group's hope of winning the information war is also failing. They say IS propagandists are unable to say their side is winning. So the propagandists are redirecting their attention and calling on IS supporters to carry out attacks in other areas.

The group released a video showing the change in its media strategy. Gone are the images of hundreds of victorious IS fighters and their many weapons. In the past, the militants also would describe the large areas of territory under their control. The new video has no claims of people living happily in an IS-ruled caliphate. 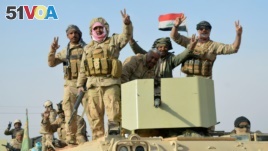 Instead, the video shows just a small group of fighters on an armored truck.

"It looks like this is Raqqa," said Charlie Winter, an expert on terrorist propaganda. He works at the International Center for the Study of Radicalization at Kings College London. He said the militant group wants to prove it is still a strong fighting force. Yet the video shows only three men in a truck in a largely empty city.

Winter noted that the most important change took place during the past few weeks. He said it was as if someone had told the IS propagandists to stop talking. He believes one or more media centers around Raqqa (in Syria) have been destroyed. Because of the group's shrinking territory, it is difficult for IS to get source material for its propaganda.

Winter said the militants are changing their message to lower expectations – from hope for a caliphate to simple survival.

"It (Islamic State) still has the true believers killing themselves in its name," he said, explaining that IS still exists even if it does not control land.

In past years, IS propaganda tried to appeal to foreigners with the dream of an Islamic utopia.

"No longer is it calling for people to travel to Syria and Iraq," Winter said, adding that it is pushing for believers to carry out attacks in their own countries.

That is where Islamic State propaganda is trying to claim success. The group says it has influenced recent vehicle attacks in European capitals and in New York City. Yet there is little evidence to support those claims.

Winter said the international media helps the militants when it reports their claims. It makes them look powerful when, in fact, they are very weak.

The most recent propaganda video from Islamic State said that the group will soon be in control of Egypt's Sinai Peninsula. Gunmen claiming to represent IS attacked an Islamic religious center there, killing more than 300 people.

Henry Ridgwell reported this story for VOANews. Susan Shand adapted his report for Learning English. George Grow was the editor.

source – n. someone or something that provided what is needed; the cause of something

utopia – n. an imaginary place in which the government, laws, and social conditions are perfect

caliphate – n. the rule of a major