Is Water Really on Mars?

Update Required To play the media you will need to either update your browser to a recent version or update your Flash plugin.
By John Russell
09 December, 2017


A new study suggests that dark markings on the planet Mars represent sand – not water.

Research in 2015 had suggested that lines on some Martian hills were evidence of water. Yet American scientists now say these lines appear more like dry, steep flows of sand.

If water is present, they said, it is likely to be a small amount. Water in liquid form would be necessary for microbial life. 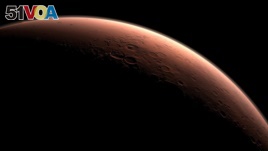 This computer-generated images depicts part of Mars at the boundary between darkness and daylight, with an area including Gale Crater, beginning to catch morning light. Northward is to the left. Gale is the crater with a mound inside it near the center of the image. NASA selected Gale Crater as the landing site for Curiosity. (NASA)

Michael Meyer is the lead scientist for NASA's Mars exploration program. He noted that the latest study does not reject the presence of water. But he admitted, "It just may not be as exciting as the idea of rivers going down the sides of cliffs."

NASA's Mars Reconnaissance Orbiter provided the images of dark lines. Thousands have been reported on the Red Planet.

The new findings come from a team led by Colin Dundas of the United States Geological Survey in Flagstaff, Arizona.

His team measured 151 of these lines in 10 areas. Most of the lines end with slopes between 28 degrees and 35 degrees. These measurements are similar to active sand dunes on both Mars and Earth, the researchers noted. They said a small covering of dust that moves and sometimes becomes lighter might help explain the markings. They usually appear in the Martian summertime, then disappear until the next year.

If these lines are dry, "this suggests that recent Mars has not had considerable [large] volumes of liquid water," the researchers wrote.

Dundas and his research team say that many questions remain.

To Meyer, the large number of questions is what makes Mars so fun. Scientists have long gone changed their thinking about the planet depending on the findings of the most recent studies.

"I still think that Mars poses a great potential for having had life early on in its history," Meyer said. "As long as that's true, we also have a reasonable possibility of life still being on Mars. It just happens to be cryptic or well hidden."

NASA currently has no robotic vehicle — either on Mars or in development — with the ability to climb steep slopes. The lack of such equipment has engineers coming up with ideas like Martian helicopters or drones.

"But going from a clever idea that works in your sandbox to something that goes to Mars takes a fair amount of engineering development," Meyer said.

Marcia Dunn reported on this story for the Associated Press. John Russell adapted his report for VOA Learning English. George Grow was the editor.

microbial – adj. of or relating to microbes or bacteria

degree – n. a form of measurement for the size of angles, the shape formed by two lines extending from the same point

volume – n. an amount of something

cryptic – adj. difficult to understand; having or seeming to have a hidden meaning