Update Required To play the media you will need to either update your browser to a recent version or update your Flash plugin.
By Gregory Stachel
05 December 2021


Scientists from around the world are going to La Palma to see a volcanic eruption, where melted rock and gas is released from the earth. La Palma is one of Spain's Canary Islands in the Atlantic Ocean. They are using advanced technologies to study the eruption from land, sea, air, and even space.

The goal of the study is to better understand volcanic eruptions: how they form, develop, as well as how and when they end.

Even with recent advances in technology and science, the researchers can only estimate what happens underground. The magma melts any human made equipment. 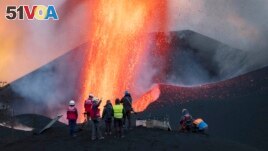 Pedro Hernández is an expert with the Canary Island's volcanology institute, Involcan. He said there has been a lot of progress in understanding how the Earth works in the last 30 to 40 years, "but it's still difficult to know for sure what happens at 40 to 80 kilometers of depth."

"We are probably beginning to know the stars better than what happens under our feet," he said.

When signs of growing amounts of magma happened, scientists began looking for signs, like earthquakes, of an upcoming eruption. They did not know the exact time of the eruption. But their studies permitted officials to begin the first evacuations just hours before the eruption took place on September 19.

One man died in November when he fell while cleaning volcanic ash, but there have been no deaths directly linked to the eruption.

Much of that is due to new technologies in volcanology.

Involcan has been producing daily reports that help officials on La Palma decide to order an evacuation or issue lockdowns when the air becomes unbreathable. This means studying extremely large amounts of information from important locations.

Most of the scientists' work has been predicting the effects of the volcano's damage to the community. It has already lost thousands of farms, roads, houses, and crops. But the question of when the eruption will end has been ongoing.

Hernández said it would take two weeks of steady studying to establish if the volcano's activity is slowing.

Esteban Gazel is a geochemist with Cornell University in New York. He said the Canary Islands are closely connected to activity going all the way to the center of the earth. It makes it even more difficult to make predictions.

"It's like treating a patient," he said. "You can monitor how (the eruption) evolves, but saying exactly when it will die is extremely difficult."

Aritz Parra and Emilio Morenatti reported this story for Voice of America. Gregory Stachel adapted it for VOA Learning English. Susan Shand was the editor.

erupt – v. to send out rocks, ash, lava in a sudden explosion