It's Important to Know Your 'False Friends' in English and French

Update Required To play the media you will need to either update your browser to a recent version or update your Flash plugin.
By Phil Dierking
22 May, 2018


People learning a second language might have heard of the expression "false friend." This term is used to describe words in different languages that look alike, but have different meanings.

Last month, we looked at examples of false friends in two languages, English and Spanish. Today we will tell you about another language -- French -- that has a lot of false friends, the French words faux amis, in English.

A history of faux amis

You may be surprised to learn that English gets 30 to 45 percent of its words from French. The reason goes back to the year 1066, when Norman forces invaded what is now Britain. The Normans were from northern France and spoke French. During the Norman occupation, French became the language of England's rulers and wealthy class. This lasted for more than 300 years. Other people in England continued to speak English during this period. 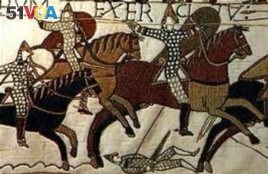 French began to enter the English language after the Normans invaded Britain in 1066.

Over time, the two languages combined and shared words. Some researchers believe that about 10,000 French words eventually entered the English language.

However, although English took many French words, their meanings have not always stayed the same. Sometimes the differences in meanings can be very important, and lead to funny or strange situations if the words are use the wrong way.

Take, for example, the French word collège. In English, college can often be used in place of the word university, or sometimes as a school within a university. However, in French, collège actually means "middle school," or the level of schooling for students in grades five or six through eight.

The meanings of chat, journée, joli

There are many other similar words in the two languages with completely different meanings.

If an English speaker says someone is jolly, that means they are cheerful or friendly. But in French, jolie means someone is good-looking or pleasant to look at. In any case, both are nice things to say to someone .

Also in English, to go on a journey usually means "a long trip of some kind." But in French, a journée is simply the word for a full day. So, when you hear French-speakers say, "Bonne journée," they are telling you to have a good day – not a good trip!

In English, the verb "demand" is something you say when you have a strong need for something. It is usually an impolite way to ask for something. However, in French, the word demander is a better way "to ask" for something. The speaker is showing more consideration of the other person's feelings.

Native English speakers are often afraid to use demander when speaking French as they worry that it may sound impolite. But worry not!

Demander can also mean "to wonder" in French, if you put the word me in front of it. So, for example, the expression "Je me demande quand le film commence" means, "I wonder when the movie begins."

He eventually will finally arrive

Sometimes French and English words can have almost the same meaning, but with small differences. In English, if your friends will eventually arrive, that means they are not expected to arrive right now, but at some time in the future. In French, the word eventuellement means that they will possibly arrive, but their arrival is not guaranteed.

However, if you wanted to say in French that your friend will not arrive any time soon, but at some time in the future, you would use the word finalement.

This can be confusing because the English word finally means that something will happen after a long period of waiting. It can also mean the last step in a process. The two words are similar, but with a very small difference in meaning.

Some false friends are important to know because you can accidentally say strange things if you use the words the wrong way.

For example, in English, the word preservative is a chemical added to food to keep it fresh. But in French, a préservatif is a condom.

As you can imagine, mixing up the meanings could lead to awkward exchanges or laughs for language learners.

Another example is the word bra. In English, a bra is a piece of women's underwear. But in French, bras simply means an "arm."

The French verb exciter or the adjective excité can cause problems for English speakers. Their meanings are the same as the English verb "to excite" and the adjective "excited." However, one needs to be careful with when using this word. While French speakers may use exciter to say that someone becomes excited about something, often in French, exciter is actually used to mean "sexually excited."

In some cases, it might be safer to think of different words to use if you don't want to risk creating an awkward situation.

It's not too terribly bad: "Pas terrible"

So if you ask a friend if they liked the food you prepared for them, and they say it's "not terrible," in English, that would mean it's not so bad. But if a French friend says that it was pas terrible, then you know you better improve your cooking skills.

There are many more false friends in French, but these are some of the most common ones. However, if you speak French, and are planning on traveling to an English–speaking country, it might be a good idea to study these before you go!

casually - adj. done without much thought, effort, or concern

condom - n. a thin rubber covering that a man wears on his penis during sex in order to prevent a woman from becoming pregnant or to prevent the spread of diseases

confuse - v. to make (someone) uncertain or unable to understand something

literal - adj. involving the ordinary or usual meaning of a word