What to Do with Radioactive Water from Fukushima

Update Required To play the media you will need to either update your browser to a recent version or update your Flash plugin.
By Mario Ritter
03 December, 2017


Japanese officials are trying to decide what to do with thousands of tons of radioactive water from the damaged Fukushima nuclear power plant.

More than six years have passed since a powerful earthquake and tsunami severely damaged the power plant.

Some parts of cleanup efforts have gone well. People can now work in the area although they take special measures to avoid overexposure to radioactive substances.

The water remains a big problem however. Currently, the water is being stored in 900 large tanks near the nuclear center.

Conflicting opinions between two groups have kept Japanese officials from doing anything about the water.

Radiation experts advise the government to slowly release the water into the Pacific Ocean. They note that special treatment has removed the radioactivity from the water except for tritium, a radioactive form of hydrogen. The experts say tritium is safe in small amounts.

But local fisherman oppose the release of the water into the sea. They say people will not buy fish from waters near Fukushima if the water is released.

The fisherman lost their livelihoods for a long time after the disaster. Local fisheries are slowly recovering.

Fumio Haga fishes about 50 kilometers from the power plant. He said, "People would shun Fukushima fish again as soon the water is released."

The disaster was both deadly and had long-lasting environmental and economic effects.

An extremely powerful magnitude 9.0 earthquake struck off the coast of Japan on March 11, 2011. The quake caused deadly tsunami waves on the country's northeastern coast. More than 18,000 people were killed.

The earthquake and waves caused the electricity to go out in many places including Fukushima. As a result, the cooling system failed in three of the six nuclear reactors which caused the nuclear fuel to overheat and partly melt structures in the power plant.

Radiation entered the air and contaminated water flowed into the sea.

That event hurt the livelihoods of people throughout the area. Although there are about 1,000 fishermen in the area today, only half still fish and they go out only two times a week because demand is low.

To be sold, the fish have to meet, what might be, the world's most demanding requirements. Laboratory workers at Onahama test the fishermen's catch, recording who caught the fish and where. And fish from the area is sold with official "safe" stickers.

Fifteen months after the disaster in 2012, only three kinds of fish could pass the safety inspection. Now the number has increased to over 100. 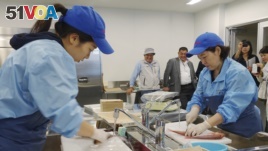 Yoshiharu Nemoto is a researcher at the Onahama test station. He said the fish may contain less than half of the radioactive cesium level permitted under Japan's national standard and one-twelfth of the U.S. or European Union limit.

But consumers have not heard that message.

Over the years, fewer Japanese consumers avoid fish products from waters near Fukushima. But a study by Japan's Consumer Agency in October found that 20 percent still do. The study found that consumers were more likely to pay attention to information about possible bad health results than to facts about radiation and safety standards.

Naoya Sekiya is an expert on social research and social psychology. He said the water from the nuclear power center should not be released until the public is well-informed about the facts.

"A release only based on scientific safety, without addressing the public's concerns, cannot be tolerated in a democratic society," he said. He said a release when the public is not prepared would only make things worse.

Kikuko Tatsumi is a representative of a consumer group and serves on a government expert panel with Sekiya. The group has been trying to decide what to do with the water for longer than one year.

Tatsumi said the delay in making a decision may be increasing concerns among the public. Many people believe the water is stored because it is dangerous and they think Fukushima fish are not available because they are not safe to eat.

Water from the center is a continuing problem

The Associated Press reports the amount of radioactive water at Fukushima is growing by 150 tons a day. This is because new water is used to cool the damaged reactors and ground water also enters the reactor area through cracks.

The water is a costly problem for the utility company Tokyo Electric Power Co, or TEPCO which owns Fukushima. Last year, another group of government experts recommended that TEPCO should dilute the water by about 50 times and release it into the sea over time. The process could take 10 years to complete.

The new chairman at TEPCO, Takashi Kawamura, caused a strong reaction in the fishing community in April. He had expressed support for releasing the water.

But after strong opposition, the company withdrew the idea and said it had no plans for an immediate release and can continue storing water until 2020.

So, the problem continues, and the amount of radioactive water at Fukushima is growing.

Mari Yamaguchi reported this story for AP. Mario Ritter adapted it with additional materials for VOA Learning English. Hai Do was the editor.

contaminated –adj. having something added that should not have been added

stickers –n. small signs that can be stuck onto products with adhesive

tolerated –adj. to stand, to permit without showing approval

panel –n. a group of people who answer questions, give advice or opinions about a subject