Update Required To play the media you will need to either update your browser to a recent version or update your Flash plugin.
By Dan Novak
08 December 2021


Japanese billionaire Yusaku Maezawa arrived for a 12-day stay at the International Space Station, or ISS, on Wednesday. The trip is the latest and the longest in a year of increasing space tourism.

The businessman and his assistant Yozo Hirano left for the station in a Russian Soyuz spacecraft with Russian astronaut Alexander Misurkin. Hirano went along to film the trip.

The price of the trip has not been made public, but some reports say it costs some $50 million. The 46-year-old Maezawa had been training at a space center outside Moscow in recent months. 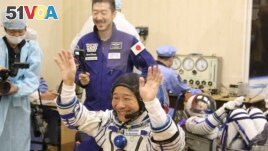 "I would like to look at the Earth from space. I would like to experience the opportunity to feel weightlessness," Maezawa said Tuesday before the flight. "And I also have a personal expectation: I'm curious how the space will change me, how I will change after this space flight."

A company that organized the flight said Maezawa listed 100 things to do in space after asking the public for ideas. The list includes "simple things about daily life to maybe some other fun activities, to more serious questions as well," Space Adventures President Tom Shelley said.

Maezawa made his money in clothes, creating Japan's largest online fashion site, Zozotown. Forbes magazine estimated his worth at $2 billion. He has become famous in Japan through his liking of private planes and sports cars, cash giveaways to Twitter followers and famous girlfriends.

Maezawa joins the list of billionaires who have recently paid for trips to space. Amazon founder Jeff Bezos and Virgin Group founder Richard Branson both went to space earlier this year.

Maezawa is also planning a trip around the moon on Elon Musk's Starship. That trip is scheduled for a time in the next few years. He will be joined on that trip by eight contest winners.

The Associated Press and Reuters reported this story. Dan Novak adapted for VOA Learning English. Hai Do was the editor.

tourism — n. the activity of traveling to a place for pleasure

curious — adj. having a desire to learn or know more about something or someone

flight — n. the act of moving through the air or through outer space

contest — n. an event in which people try to win by doing something better than others