Update Required To play the media you will need to either update your browser to a recent version or update your Flash plugin.
By Hai Do
07 August, 2018


The largest wildfire in California's history continues to grow. Hot and windy conditions have tested firefighters across the state.

The Northern California fire by the Mendocino National Forest has now destroyed 1,178 square kilometers. That is nearly the size of Los Angeles.

The Mendocino fire continued to grow this week, even after it passed a record set only eight months ago. Last December, the Thomas fire destroyed 1,139 square kilometers in Southern California. It killed two people and burned more than 1,000 buildings.

The Mendocino fire is mostly burning in remote areas. But officials say it threatens more than 11,000 buildings. Over the weekend, officials ordered more people to leave their homes.

A spokesman for the California Department of Forestry and Fire Protection, or Cal Fire, said more than 14,000 firefighters are now battling major fires across the state. 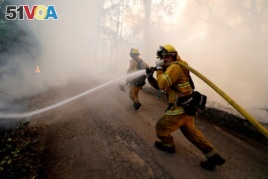 A firefighter knocks down hotspots to slow the spread of the River Fire (Mendocino Complex) in Lakeport, California, U.S. July 31, 2018. REUTERS/Fred Greaves

Another wildfire in Northern California has destroyed more than 1,000 homes in and around the city of Redding. Cal Fire said that wildfire started more than two weeks ago. It has killed two firefighters and four residents. It displaced more than 38,000 people.

U.S. President Donald Trump has declared a "major disaster" in the state. Trump also wrote on Twitter that the wildfires are growing because of "bad environmental laws." He said the laws do not permit, in his words, "massive amount of readily available water to be properly utilized."

A spokesman for Cal Fire did not comment on Trump's tweet. But the spokesman did say that firefighters have enough water to fight the fires.

The U.S. National Weather Service says firefighters will have to deal with temperatures as high as 43 degrees Celsius over the next few days. Strong winds may also strengthen the flames.

remote - adj. far away from other people, houses, cities, etc.

utilize - v. to use something for a particular purpose

flame - n. the hot, glowing gas that can be seen when a fire is burning