Legal Protection Rule for Internet Companies Could Be Changed

Update Required To play the media you will need to either update your browser to a recent version or update your Flash plugin.
By Alice Bryant
03 June 2020

The law is known as Section 230 of the 1996 Communications Decency Act. It is facing new attention and might be changed.

It protects internet companies from facing legal cases over things others place on their platforms. Under U.S. law, the companies are generally not responsible for things their users post on their websites.

But last week, President Donald Trump pushed back against Section 230 with an executive order. The order says the government will reconsider protections if companies make "editorial decisions" about what users post.

Trump and other politicians say that Twitter, Facebook and other social media companies have abused protections from Section 230. They have argued that the law should be changed or cancelled altogether.

Some experts suggest that the internet as we know it today might change completely if the law were cancelled.

Here are some common questions and answers about the law. 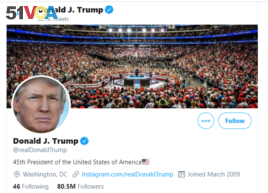 An example might help answer that question. If a news website falsely calls you a cheat, you can bring legal action against the publisher. But if someone posts on Facebook that you are a cheat, you cannot bring a legal case against Facebook — only the person who posted it.

The law protects companies, which can have many millions of posts, from facing legal cases brought by anyone who feels wronged by something someone else has posted. It does not matter if the post is true or false.

Section 230 also permits social media services to remove posts that are obscene or violate what the service considers acceptable. In addition, the law requires the service to be acting in "good faith."

In legal terms, "good faith" means acting with honesty and fairness and without the desire to destroy the rights of a person or business.

Where did Section 230 come from?

The measure has its roots in the 1950s, when bookstore owners were being held responsible for selling books containing "obscenity." Obscenity is not protected by freedom of speech rules in the First Amendment.

One case on the issue reached the Supreme Court. The Court ruled that it was unlawful to hold someone responsible for someone else's writings.

The 1990s were years when the internet experienced huge growth. Two companies operating at that time were CompuServe and Prodigy. They offered online forums where people could share information. CompuServe chose not to moderate its forum, while Prodigy did.

CompuServe was taken to court over its policy. That case was dismissed. Prodigy, however, got in trouble. A judge ruled that Prodigy "exercised editorial control" said Jeff Kosseff. He wrote a book about Section 230 called "The Twenty-Six Words That Created the Internet."

Politicians did not like the judge's decision. They worried it would lead internet companies not to moderate at all. And Section 230 was born.

What if Section 230 is limited or goes away?

Kosseff told the Associated Press, "I don't think any of the social media companies would exist in their current forms without Section 230." He said the companies have based their business models on being platforms for user posts.

There are two possibilities of what could happen. Platforms might remove some of their offerings. The website Craigslist, for example, took down a section from its website after the 2018 passage of a sex-trafficking law. The law created an exception to Section 230 for material that supports sex work. Craigslist quickly removed its "personals" section completely. The company did not want to take chances.

Kate Ruane is a senior lawyer for the American Civil Liberties Union. She said that if social media platforms were not protected under the law, they would not risk posting Donald Trump's posts.

Services like 8chan, which is known for letting users post extremist images and messages, could then easily take control of social media, said Eric Goldman. He is a law professor at Santa Clara University in California. He said undoing Section 230 would be dangerous to the internet.

But Goldman does not see the administration's order as that kind of threat to the internet. He said it is meant to appeal to Trump supporters. "The president can't override Congress," he said.

The Associated Press reported this story. Alice Bryant adapted it for VOA Learning English. Mario Ritter, Jr. was the editor.

post –v. to add a message to an online message board

platform –n. a tool, often involving technology that permits a person or group to tell a large number of people about an idea, product, etc.

obscene –adj. relating to sex in an indecent or offensive way

forum –n. an area of a website where people go to discuss things

moderate –adj. to guide a discussion or direct a meeting involving a group of people