Update Required To play the media you will need to either update your browser to a recent version or update your Flash plugin.
By Susan Shand
01 October 2020


The American Library Association (ALA) released its list of the 100 books that have been censored the most in the United States. The ALA calls it the list of most "challenged books." The list includes books from writers Toni Morrison, a Nobel Prize winner, John Green, Harper Lee and Margaret Atwood.

Sherman Alexie's prize-winning "The Absolutely True Diary of a Part-Time Indian" came in at No. 1. It was followed by Dav Pilkey's "Captain Underpants" picture books and Jay Asher's young adult novel "Thirteen Reasons Why." Parents' criticisms of these book included descriptions of illegal drug use and suicide. Offensive language was also one of the reasons. 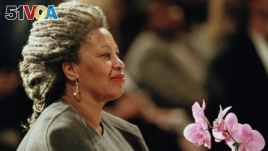 FILE - In this April 5, 1994, file photo, Toni Morrison holds an orchid at the Cathedral of St. John the Divine in New York. (AP Photo/Kathy Willens, File)

A lot of the books on the list show that parents are questioning "books by people of color and books from the LGBTQ community," said Deborah Caldwell-Stone. She is the director of the library association's Office for Intellectual Freedom.

Examples include Morrison's "The Bluest Eye," about a Black girl raped by her father; Alex Gino's "George," about a transgender child; and Justin Richardson's and Peter Parnell's picture book about two gay penguins, "And Tango Makes Three."

The list was announced this week as the library association prepares for its yearly Banned Books Week.

The ALA explains that an attempt to censor a book is a "written complaint filed with a library or school requesting that materials be removed because of content or appropriateness." The list comes from news reports and from documents from libraries and others in the local community.

The ALA also said that many attempts at censorship are not reported. The association does not count the number of times books are removed from a library or from a school reading list.

The list over the past 10 years includes popular books such as Harper Lee's "To Kill a Mockingbird" and Mark Twain's "The Adventures of Huckleberry Finn." It also includes newer works, such as Suzanne Collins' "The Hunger Games." "The Hunger Games" has been accused of being anti-family and celebrating violence. Others included were Margaret Atwood's "The Handmaid's Tale," John Steinbeck's "Of Mice and Men" and J.D. Salinger's "The Catcher in the Rye."

Most of the books are fiction, but the list also includes such nonfiction works as Jeanette Walls' story about her childhood "The Glass Castle," and "Anne Frank: Diary of a Young Girl." Frank died in a Nazi concentration camp. In the book, she wrote about her growing sexual feelings as she and her family hid from the Nazis in Amsterdam during World War II.

"There are actually two lines of objections to the Anne Frank diary," Caldwell-Stone said. One of the criticisms was about Anne's growing interest in a boy. The other is that "it was inappropriate for someone 12 years old to learn about the Holocaust. It was too much of a downer."

censor– v.to examine books, movies and other media to find out if there are things considered offensive, immoral, or harmful to society

challenged–adj. something that has been challenged or objected to

underpants– n.the clothe worn closest to the skin underneath pants or shorts

appropriate– adj. right for some purpose or situation

transgender– adj. related to people who feel their true nature does not match their sex at birth

penguins– n. black and white flightless birds that swim and live in the southern half of the world

fiction– n.written stories about people and events that are not real

objection– n. a reason for disagreeing with or opposing something

downer – n.something that is unpleasant or depressing