Update Required To play the media you will need to either update your browser to a recent version or update your Flash plugin.
By Bryan Lynn
12 May 2021


A growing number of social media companies are currently developing ways for their users to communicate through voice. The latest company to announce such a service was Twitter, which launched its new offering last week.

Moves to add audio as a way for users to connect demonstrate the popularity of the social media app Clubhouse, a social network based completely on voice communication.

Clubhouse was launched in March 2020 by two American businessmen. It permits users to communicate through audio in virtual discussion rooms, also known as "chatrooms." There are many rooms covering a wide range of subjects and users can create their own rooms.

People who want to join the app must first be approved after being invited by someone who already has it. Clubhouse had only been available for iPhone users since its launch. But a new version for Android devices was released to U.S. users this week and is set to launch soon in other countries. 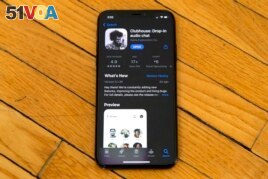 Apple's App Store page for the social media app Clubhouse is displayed on a smartphone screen in Beijing, Tuesday, Feb. 9, 2021.

Clubhouse was launched during the coronavirus pandemic when people around the world faced restrictions that kept them at home. Its popularity grew after appearances on the app by several famous people, including Facebook's Mark Zuckerberg and Tesla and SpaceX chief Elon Musk.

Clubhouse reached a high of 9.6 million downloads in February, industry researcher Sensor Tower reported. However, downloads of the app then dropped to 2.7 million in March, Sensor Tower said. Clubhouse recently reported it had about 10 million active weekly users.

In some parts of the world, the app has become a favored place to speak freely about issues considered too sensitive to discuss in public or on other forms of social media.

The app also rose in popularity in the Arab world, Reuters news agency reports. People in places such as Saudi Arabia, Egypt and Iraq used the service to have open debates on sensitive subjects such as women's rights and sexual identity.

Bloomberg reported last month that Twitter was in talks to buy Clubhouse for $4 billion. The talks did not result in a deal. However, Twitter recently launched its own live audio product, called Spaces.

Twitter's new service is currently only available to users with 600 or more followers. Those users can open, or host, their own virtual "Space," and can also charge people money to enter. Twitter says it plans to offer the service to all users in the future.

"You've always followed people for their Tweets," Twitter said in a statement. "Now Spaces lets you hear their voices and talk about what's happening now and what's most important to you – live."

Facebook is also preparing to offer voice communications when it launches its planned Live Audio Rooms service. The company said last month it would first test the service in Facebook Groups before making it available to all users by the summer. It also plans to add live audio to its Messenger service to permit one-on-one or group audio conversations among Facebook friends.

Last month, the social network Reddit launched its own new live audio service called Talk, which offers live voice communication between users. And in March, job networking site LinkedIn also confirmed to TechCrunch that it was working on a live voice product to connect users.

There are other, lesser known, apps that already offer live voice audio. Two of them -- Stereo and Spoon -- mainly aim to provide social communications similar to Clubhouse. Others include Discord, which is popular for gamers, and Yac, which has tools aimed at improving work meetings.

Bryan Lynn wrote this story for VOA Learning English, based on reports from Clubhouse, Twitter, Facebook and Reuters. Hai Do was the editor.

We want to hear from you. Have you used Clubhouse or any other live audio apps? Write to us in the Comments section, and visit 51VOA.COM.

app – n. a computer application or program used for a specific purpose

virtual – adj. something that exists in computers or on the internet, and that is not physical