Update Required To play the media you will need to either update your browser to a recent version or update your Flash plugin.
By John Russell
09 September, 2017


On November 11, the Louvre Abu Dhabi museum will open in the capital of the United Arab Emirates.

The museum is part of a project designed to appeal to millions of visitors every year.

The waterfront museum will hold hundreds of pieces of art representing ancient and modern times around the world. It will include Middle Eastern objects and paintings, as well as works by Western artists. 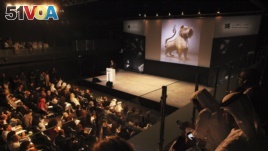 Emiratis and journalists listen to an announcement about the opening of the Louvre Abu Dhabi in Abu Dhabi, United Arab Emirates, Sept. 6, 2017.

The Louvre in Paris, France is one of the most famous museums in the world. In 2007, France agreed to take part in a joint project to open an art museum in Abu Dhabi. French officials say the collection does not face any restrictions.

Jean-Francois Charnier is the scientific director of Agence France-Museums. He said the museum organizers had complete freedom in making decisions about the art to present.

"You have nude statues in the museum, contemporary paintings. You also have religious images from all religions," he said.

The works will represent major periods of human development and will show connections between different cultures, Charnier said.

"The objective," he said, "is to show that in history there are more links and bridges than walls."

The museum also has a 3000-year-old Egyptian funeral set.

Famed French architect Jean Nouvel designed the museum. It is almost 100,000 square meters in size. It includes a series of white buildings under a huge, rounded steel top. The steel is cut in numerous places and shapes to let in daylight and produce beautiful shadows.

French Culture Minister Francoise Nyssen spoke at a news conference in which the museum opening was announced.

"At a time when some forces are attacking history by destroying work, taking our heritage hostage, this is an essential act," she said. "It is civilization responding to barbarity."

Sylvia Westfall reported on this story for Reuters. John Russell adapted it for Learning English. Caty Weaver was the editor.

nude – adj. of or involving people who have no clothes on