Many Students Not Taking Part in Distance Learning

Update Required To play the media you will need to either update your browser to a recent version or update your Flash plugin.
By John Russell
17 June 2020


As the school year ends in the United States, educators have been trying to get large numbers of students moving forward in their studies again.

The concern is that students who were behind on their schoolwork before the COVID-19 crisis will drop back even further when classes re-start in the fall. 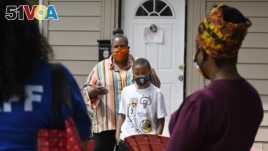 One of those educators is Tayarisha Batchelor, principal of Rowson Elementary School in Hartford, Connecticut. She recently visited students at their homes.

Jamie-Lee is a third grader at Rowson. Batchelor held her arms out as if she were giving him a big hug when she visited his home. She told him how much she had missed him since the pandemic closed the school.

The boy's eyes stayed on his smartphone as they spoke. Batchelor asked him what he was doing. Playing video games was his answer.

"I like playing games," Batchelor told the boy as his parents looked on. She then suggested he spend more time on his daily schoolwork. "I want to make sure you are still learning," she said.

Almost one-third of Batchelor's students have not taken part in the school's online learning program.

Batchelor said she discovered many reasons for that as she visited homes. Internet connections failed; parents were unable to supervise their children's studying; students did not know how to use technology and more.

Across the Hartford school system, almost 80 percent of students are at least partly active in distance learning. But less than half of the population considered most at risk are doing so. The at-risk group includes students with poor attendance records, behavior problems, low marks or a mix of such issues.

School systems across the United States have similar concerns. Some report that they have students who have not been heard from at all since the start of school closures in March.

Bret Apthorpe leads Jamestown Public Schools in New York state. He said about 75 percent of the system's students took part in distance learning every day and most of the rest took part some of the time. But, around one percent, he said, have "fallen off the map." In other words, they have not taken part at all.

At Clark County schools in Nevada, about 12,000 students missed online classes in mid-April. Officials took action to get these children back to their studies. Even so, about 4,500 students remained uninvolved at the end of the year. The head of the Clark County school system, Jesus Jara, said some students did not have computers and others had gotten jobs.

Batchelor said the education effects of the widespread school closures will not be clear until educators see students' work in the fall. Nationally, research has suggested the shutdowns could cost students about a full year of learning.

For now, Batchelor said, parents and educators are doing their best, adding, "they might be having a difficult time doing it, but parents want their students to succeed, and they want to work with us."

principal -- n. the person in charge of a public school

hug -- n. the act of putting your arms around someone or something as a way of showing love or friendship

mark -- n. a number or letter that indicates how a student has performed in a class or on a test