Melania Trump Wants to Be Best

Update Required To play the media you will need to either update your browser to a recent version or update your Flash plugin.
By Alice Bryant
10 September 2020

Melania Trump is married to Donald J. Trump, the 45th president of the United States. 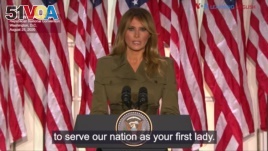 In her position as U.S. First Lady, she launched BE BEST, a campaign focused around the well-being of children. Part of BE BEST is aimed at the opioid drug crisis and how to protect youngsters from drug abuse.

Melania Trump is only the second first lady born outside the United States. She was born Melanija Knavs on April 26, 1970 in a small town in Slovenia, which was then part of Yugoslavia. Her mother was a pattern maker for children's clothing. Her father sold automobiles and was a member of the Communist Party.

The future Melania Trump grew up with a sister. Later in life, she found out she also had a half-brother. He belonged to her father from an earlier relationship.

As a young woman, she reportedly had dreamt of leaving behind small-town life in Slovenia. Modeling would offer that chance.

Melanija Knavs began working as a fashion model at the age of 16. She would attend college in Slovenia but left school after one year. The future first lady worked in Milan and Paris under the name Melania Knauss, the German pronunciation of her name.

In 1996, she moved to New York City. There, she modeled for several advertising campaigns and publications, including for Max, a French magazine, and the British version of GQ.

She met Donald Trump at a fashion industry party in 1998. Seven years later, in 2005, the two were married in Palm Beach, Florida. A year later, she gave birth to a son, Barron. She also became a naturalized U.S. citizen.

In 2010, Melania Trump served as the Chairwoman for the American Heart Association. She helped the group raise $1.7 million for research. The same year, she launched her own jewelry collection.

During Donald Trump's first presidential campaign in 2016, reporters and other Americans began asking questions about Melania's private life. That is when nude magazine pictures of her from Max and GQ resurfaced.

As her husband pressed for controversial immigration reforms, critics also questioned her legal right to work as a model when she arrived in New York City.

Melania Trump also made news during the 2016 Republican National Convention. Parts of the speech she gave were found to be very similar to parts of Michelle Obama's 2008 speech at the Democratic National Convention. Not long after, Trump's speech writer claimed responsibility for the mistake.

As First Lady, Trump has made many visits to schools, both in the United States and overseas.

A little over a year after her husband took office, the First Lady launched her BE BEST campaign. It had three aims: to support the social and emotional well-being of children; protect children from effects of the opioid crisis; and fight bullying of children, especially on social media.

Parts of the campaign have been well-received. For example, Melania Trump has visited children's hospitals for a firsthand look at the effects of opioid abuse on babies. She also has taken part in opioid conferences and continues to speak on opioid abuse and how to better protect children from it.

The first lady's critics pointed out the contradiction between her mission to protect children and the Trump administration's immigration policies. They said the administration separated thousands of immigrant children from their parents and placed them all in crowded, unclean detention centers with little food.

In a statement in summer 2018, she said she hated to see children separated from their families and hoped Republicans and Democrats would come together on immigration reforms.

A few days later, she made an unplanned visit to a Texas detention center for immigrant children. But the visit made news for a different reason: She wore clothing with writing on it that said, "I REALLY DON'T CARE, DO YOU?" on the way to and from Texas.

In her speech at the 2020 Republican National Convention, Melania Trump expressed that she did care about some things.

The First Lady spoke with kindness about the nation's struggles with racial issues. She talked about "the beautiful side of humanity" she has observed following natural disasters around the country. She expressed sympathy for families affected by COVID-19, an "invisible enemy" she said that has tested the United States but brought its citizens together.

And she said, "Total honesty is what we as citizens deserve from our president."

Alice Bryant wrote this profile for Learning English. George Grow was the editor.

fashion - n. the business of creating and selling clothes in new styles

divorce – n. the ending of a marriage by a legal process

pronunciation – n. the way in which a word or name is said

nude – adj. having no clothing on

contradiction – n. the act of saying or doing something that is opposite or very different from something else