Millions of Americans Will Not Vote in English on Election Day

Update Required To play the media you will need to either update your browser to a recent version or update your Flash plugin.
By Hai Do
06 November 2022


Tuesday, November 8 is Election Day in the United States.

This year, American voters will be taking part in what is known as midterm elections. The elections are called this because they happen nearly two years – or about the middle point – into the term of the U.S. president.

Members of the U.S. House of Representatives are elected every two years. So in the midterms, all 435 House seats are decided. In addition, every two years one third of U.S. Senate members are either elected or leave their seats at the end of the term. 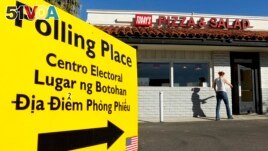 FILE - A voter arrives to cast ballots at a local restaurant being used as a polling station in California November 2, 2010. The sign has translations in Spanish, Tagalog and Vietnamese. ( REUTERS/Mike Blake /File)

American voters will also be choosing governors, state lawmakers and local officials. The election results will decide which party controls Congress, as well as state offices and legislatures.

In order to vote in federal and state elections, a person must be a U.S. citizen and be at least 18 years of age. The person also has to meet the state residency requirements. In every state except North Dakota, people must also register to become voters.

This year, more than 80 million Americans will have the chance to vote in a language other than English. That is because U.S. federal law guarantees that certain groups of people can receive language assistance in the voting process.

Gabe Osterhout is a researcher at the Idaho Policy Institute at Boise State University. He said, "The idea was to take groups that were historically excluded from the electoral process, and the mission was to make it more accessible for some of those groups."

The Voting Rights Act of 1965 was signed into law to protect the right to vote for African Americans mainly in the South. The act was expanded in 1975 to include certain language minorities. These included Native Americans, Alaska Natives, Latinos and Asian Americans.

Jim Tucker is a lawyer with the Voting Rights Project at the nonprofit Lawyers' Committee for Civil Rights Under Law. He noted that for citizens with limited knowledge of English, voting information can be "a barrier to the ability to participate."

How do officials decide on languages?

Every five years, the U.S. Census Bureau chooses which minority language groups will receive help with information in their native language.

In December 2021, the U.S. Census identified 331 areas that meet the requirements ahead of the 2022 midterm elections. Most of the covered areas, called jurisdictions, are in three states, California, Florida and Texas. Those states must provide Spanish-language voting materials in every statewide election.

Registration and voting data from November 1996 and 2000 found evidence that the addition of a second language has "positive effects on the voting rates of covered linguistic minorities."

The research was carried out by professors Michael Jones-Correa and Israel Waismel-Manor. It found that voter turnout among Latinos was 11 percent higher in areas covered by the language requirements than in those that did not provide materials and assistance in Spanish. The professors also found that voter registration among Latinos was 15 percent higher in areas that provided language assistance than those that did not.

Tucker observed large participation increases in all four groups covered under the language requirements. These include American Indians, Alaska Natives, Latino or Spanish-speaking voters, and Asian Americans who speak Asian languages since 1975.

The Voting Rights Act was supposed to end by 1970, but it has been extended five times. The last extension, for 25 years, came in 2006.

Dora Mekouar reported this story for VOA News. Hai Do adapted the story for Learning English.

residency - n. the state or fact of living in a place

participate - v. to take part in an activity