Update Required To play the media you will need to either update your browser to a recent version or update your Flash plugin.
By Bryan Lynn
18 February 2021

The six-wheeled explorer, or rover, is on a NASA mission to collect Martian soil and rocks as part of the search for signs of ancient life.

Ground controllers at NASA's Jet Propulsion Laboratory (JPL) in California cheered after receiving confirmation of the landing on Mars. It took 11-and-one-half minutes for the confirmation signal to reach Earth.

Perseverance landed in an area of Mars called Jezero Crater, just north of the planet's equator. The area contains a large ancient lakebed. 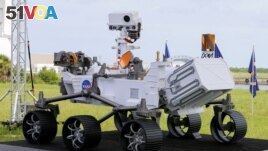 A replica of the Mars 2020 Perseverance Rover is shown during a press conference ahead of the launch of a United Launch Alliance Atlas V rocket carrying the rover, at the Kennedy Space Center in Cape Canaveral, Florida, U.S. July 29, 2020. (REUTERS/Joe Skipper)

NASA considers the area a promising place to find possible signs of microbial life. Scientists believe if life ever existed on Mars, it would have been present 3 to 4 billion years ago, when water flowed on the planet.

However, rough ground around Jezero Crater presented possible landing dangers for the Perseverance spacecraft. Al Chen is a member of JPL's landing team. He told reporters that while the area was full of things scientists want to study, it did not offer the most favorable landing conditions.

The successful landing marked the third recent visit to Mars. Last week, spacecraft from the United Arab Emirates and China entered the planet's orbit. All three of the missions launched in July to take advantage of the shorter distance between Earth and Mars at the time. This closeness between the planets happens every two years.

Perseverance is NASA's fifth rover to explore Mars. The first, named Sojourner, was sent in 1997. Then came Spirit and Opportunity, which landed in 2004. The fourth rover, Curiosity, has been exploring the planet since 2012.

Those missions all resulted in valuable information about the Red Planet. NASA says Perseverance "aims to take the next step" in searching for signs of ancient microbial life.

It is NASA's largest, heaviest and most technology-loaded vehicle ever sent to Mars. It has 19 cameras, two microphones and a two-meter-long robotic arm. A machine connected to the arm will dig into the ground to gather rock and soil.

The rover is equipped with X-ray and imaging systems to study Martian chemistry and to identify possible organic compounds.

Perseverance is also carrying a small experimental flyer called Ingenuity. NASA says the 1.8 kilogram vehicle will attempt its first flight in the coming months. NASA officials hope it will be the first vehicle to fly on a planet other than Earth.

Bryan Lynn wrote this story for Learning English, based on reports from NASA, The Associated Press and Reuters. Caty Weaver was the editor.