The latest mission of the American space agency, NASA, will explore a group of ancient objects orbiting the sun at the distance of Jupiter.

These asteroids are small bodies left over from the formation of our solar system's large planets. They share an orbit with Jupiter as the planet goes around the sun.

The mission's aim is to gather new information about the solar system's formation 4.5 billion years ago. 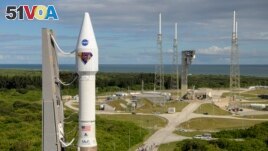 In this image released by NASA, a United Launch Alliance Atlas V rocket with the Lucy spacecraft aboard is rolled out of the Vertical Integration Facility to the launch pad at Space Launch Complex 41, Thursday, Oct. 14, 2021, in Cape Canaveral, Fla. (Bill Ingalls/NASA)

Lucy will observe eight asteroids over 12 years. One orbits in what is known as the Asteroid Belt, an area between Mars and Jupiter. Most known asteroids orbit within this area.

Scientists consider the Trojan asteroids to be the ancient remains of the formation of the solar system. They have stayed captured in Jupiter's orbit for billions of years. Scientists hope that the NASA mission can provide new details about what conditions were like when the planets formed. They also hope the mission will lead to a better understanding of our own planet's history.

The spacecraft was named Lucy after the ancient fossil discovered in Ethiopia in 1974. Lucy was one of the most famous scientific finds of the 20th century. The collection of skeletal bones gave scientists a better understanding of the evolution of humans.

Cathy Olkin is a planetary scientist at the Southwest Research Institute in Colorado. She is the deputy lead investigator for the Lucy mission. In a video explaining the mission, Olkin compared the NASA spacecraft to the Lucy fossil.

The spacecraft, built by NASA contractor Lockheed Martin, is expected to fly within 400 kilometers of its targets.

The spacecraft is equipped with several imaging instruments designed to capture information about the composition of materials on the surface of asteroids. Other equipment will be used to record asteroid surface temperatures and measure the size of the objects the spacecraft observes.

Lucy will depend on solar power to operate. NASA says the mission expects to set a record because Lucy will be deployed farther from the sun than any past solar powered spacecraft.

Hal Levison is the mission's chief scientist. He recently told reporters that although the Trojan asteroids are in a very small area of space, they are physically different from each another.

"For example, they have very different colors, some are grey, some are red," Levison said. He added that these differences suggest how far away from the Sun they might have formed before getting to their current positions.

Lori Glaze is the director of NASA's planetary science division. She said: "Whatever Lucy finds will give us vital clues about the formation of our solar system."

Bryan Lynn wrote this story based on reports from NASA, Agence France-Presse and Lockheed Martin. Mario Ritter, Jr. was the editor.

fossil – n. part of an animal or plant from thousands of year ago, preserved as minerals in rock

composition – n. the parts, substances, etc. that something is made up of