Update Required To play the media you will need to either update your browser to a recent version or update your Flash plugin.
By Bryan Lynn
21 November 2021


The American space agency NASA is preparing to launch a spacecraft that will attempt to strike an asteroid to see how the crash affects the space object's path.

The test mission is designed to demonstrate a possible method for changing the direction of asteroids that are considered threats to Earth.

NASA is calling the world's fist planetary defense mission the Double Asteroid Redirection Test, or DART. The DART spacecraft is set to launch November 24 aboard a SpaceX Falcon 9 rocket from Vandenberg Air Force Base in California.

The DART spacecraft was built and is operated by the Johns Hopkins Applied Physics Laboratory in Maryland. The project is directed by NASA's Planetary Defense Coordination Office. 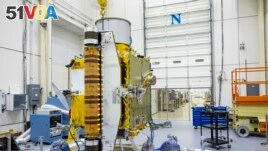 The mission's target will be an asteroid called Dimorphos, part of a two-body asteroid system. Dimorphos is a small "moonlet" that orbits a larger asteroid named Didymos. Didymos is about 780 meters across, while Dimorphos is 160 meters. It is expected to take DART about a year to reach its target.

Clayton Kachele is a mission manager for DART. He recently explained that the targeted asteroid system does not currently present any threat to Earth. Rather, the mission is meant to demonstrate a defensive method that could be used in the future if actual asteroid threats are identified. Kachele said the DART demonstration had been carefully designed to make sure the mission itself does not "create a threat."

NASA records show that about once a year, an asteroid around the size of an automobile enters Earth's atmosphere. Such objects turn into fireballs and burn up before reaching Earth's surface.

About every 2,000 years, a much larger object strikes Earth and causes damage. But NASA experts say an object large enough to threaten Earth's civilization only comes along once every few million years.

The DART spacecraft will travel to Dimorphos to demonstrate what NASA calls a "kinetic impactor" method. This method involves the spacecraft purposefully crashing into the asteroid at a high speed to change the object's motion in space.

Lindley Johnson is NASA's Planetary Defense Officer. He said in a statement this method is currently considered "the most technologically mature" way to redirect a possibly dangerous asteroid.

After DART strikes Dimorphos, an investigative team will use telescopes on Earth and in space to measure how much the asteroid moved.

Results of the test will then be examined so that scientists can create small impact experiments in a laboratory. The team will also use DART data to build new computer models in order to understand how such defensive impacts could affect a range of near-Earth objects.

NASA says the DART mission is testing several new space technologies. One of them is a navigation system known as SMART Nav, which permits the spacecraft to guide itself without operator assistance.

Another new technology is a power-producing solar system that is expected to provide three times more electricity than similar systems used in the past.

Bryan Lynn wrote this story for VOA Learning English based on reports from NASA. Ashley Thompson was the editor.

comet – n. an object in space that leaves a bright line behind it in the sky

navigation – n. to find the right direction of travel by using equipment or maps