Update Required To play the media you will need to either update your browser to a recent version or update your Flash plugin.
By Bryan Lynn
11 July 2021


The U.S. space agency NASA is reporting new progress on Mars for its experimental helicopter and Perseverance explorer. The helicopter, called Ingenuity, completed its ninth flight on the Red Planet on July 5.

NASA described the flight as the most successful so far. This is because Ingenuity broke several new records: for length of flight, speed and distance.

The helicopter's movements are controlled by a team operating from NASA's Jet Propulsion Laboratory (JPL) in California. The team said in the ninth flight, Ingenuity traveled for the first time across what it described as "unfriendly terrain." The previous flights involved shorter trips over mostly flat terrain.

The helicopter is working together with NASA's Perseverance explorer, or rover. Currently, both are in an area of Mars known as "Séítah." The area contains rocks, sandy hills and craters.

This kind of terrain can present challenges for Ingenuity, raising the possibility the aircraft could crash during flight or upon landing. The team says one reason for this is that Ingenuity was built to guide itself with an algorithm designed to fly it across mainly flat ground.

The main goal of the Ingenuity experiment was to demonstrate that a helicopter could successfully take off, fly and land on Mars. The aircraft was not built to perform detailed searches and other complex operations. But since Ingenuity has progressed so well in previous tests, NASA controllers decided to push its limits even further. 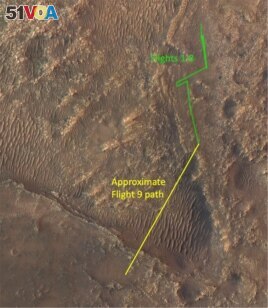 The team described the latest flight as a "nail-biter." But in the end, it reported Ingenuity was "alive and well" after completing a trip of 625 meters through "challenging terrain." The flight lasted 2 minutes and 46 seconds. The aircraft reached a speed of 5 meters per second.

As it flies, Ingenuity captures detailed images of the surface of Mars. NASA says the helicopter's ninth flight was designed to provide "the first close view of major science targets that (Perseverance) will not reach for quite some time."

The latest images will be studied by the Perseverance team, which will then decide which areas may be most valuable for the rover to visit. Ingenuity is supporting Perseverance's goal to collect Martian soil and rocks to help scientists search for signs of ancient life on the planet.

NASA also recently announced that Perseverance has started using an improved self-navigation system as it expands its exploration activities across Mars.

So far, the rover's team at JPL has been planning the navigation paths and sending the travel instructions to Perseverance. But now, NASA says the rover will increasingly "take charge of the drive by itself -- using a powerful auto-navigation system."

The system, called AutoNav, first creates a three-dimensional, or 3D, map of the terrain ahead. It then identifies any objects in the path and maps the best way to avoid them. JPL controllers say AutoNav can complete this process without any additional direction from them.

Vandi Verma is a senior engineer, rover planner and driver at JPL. She said in a statement the system gives the rover the ability to "think while driving." She added: "The rover is thinking about the autonomous drive while its wheels are turning."

NASA says that ability, combined with other improvements, might enable Perseverance to hit a top speed of 120 meters per hour. Another NASA rover on Mars, Curiosity, is equipped with an earlier version of AutoNav. On average, it moves about 30 meters per hour.

Bryan Lynn wrote this story, based on reports from NASA. Hai Do was the editor.

nail-biter – n. an event that is exciting because you do not know how it will end

navigation – n. the movement and leading of things, such as ships or vehicles