Update Required To play the media you will need to either update your browser to a recent version or update your Flash plugin.
By Bryan Lynn
01 November 2020


A NASA spacecraft that recently collected rocks from an asteroid captured far more material than expected. The American space agency says the sample was so large that it blocked the container door of the collector.

The Osiris-Rex spacecraft successfully completed its asteroid sample operation on October 20. The explorer's robotic arm touched the asteroid Bennu for a few seconds to produce dust and rock samples for collection. Bennu sits about 320 million kilometers from Earth.

The samples were then trapped in a device called the collection head. NASA discovered the blocked door of the device in images received from the team controlling the spacecraft. The blockage caused some asteroid material to escape back out into space. 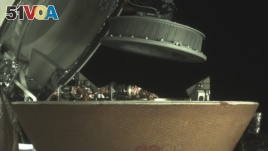 In this undated image provided by NASA, a sample container hovers over a capsule on the Osiris-Rex spacecraft near the asteroid Bennu. (NASA via AP)

Because of this, NASA scientists made the decision to move up the timeline for completing the next step in the operation. This involves stowing, or storing, the collection head in a secure capsule within the spacecraft.

"Time is of the essence," Thomas Zurbuchen told reporters about the change in plans. He is NASA's associate administrator for science.

The operation to stow the samples is carried out in a series of steps. After each step, the spacecraft sends information and images back to Earth. Different members of the team watch the process to make sure things progress correctly.

The spacecraft is so far away that it takes about 18 minutes for its signals to reach Earth. Any communication from ground controllers requires the same amount of time to reach Osiris-Rex. Because of this, the stowing process was expected to take several days.

Scientists believe the operation captured up to 400 grams of asteroid material. This is far more than the 60 grams NASA said it hoped Osiris-Rex would collect.

But mission leaders said they will not know exactly how much material is inside until the sample capsule gets back to Earth. The team had planned to carry out a process to measure the sample. But that plan was canceled because NASA said it could have caused even more material to spill out.

"I think we're going to have to wait until we get home to know precisely how much we have," Osiris-Rex lead investigator Dante Lauretta told reporters. "As you can imagine, that's hard. ... But the good news is we see a lot of material."

Team members had also considered doing another collection attempt. But the leaking issue led NASA to decide against the plan. "Quite honestly, we could not have performed a better collection experiment," Lauretta said.

Osiris-Rex is expected to begin its return to Earth in March 2021. The trip will take two-and-a-half years, with the spacecraft's planned arrival set for September 2023.

The mission marked NASA's first asteroid collection operation. Japan is the only other country to have successfully captured such a sample.

Asteroids are among the leftover material from the solar system's formation about 4.5 billion years ago. NASA chose to collect a sample from Bennu because its carbon-rich material is believed to hold preserved building blocks of our solar system.

Scientists say the asteroid samples may help them better understand how planets formed and how life began on Earth.

Bryan Lynn wrote this story for VOA Learning English, based on reports from The Associated Press, Reuters, Agence France-Presse and NASA. Ashley Thompson was the editor.

asteroid – n. objects made of rock and metal which orbit the sun, but are smaller than planets

of the essence – phr. highly important

preserve – v. keep something the same or prevent it from being damaged of destroyed