Update Required To play the media you will need to either update your browser to a recent version or update your Flash plugin.
By Bryan Lynn
28 June 2020


NASA is supporting a new project to search the universe for signs of technology that may provide evidence of intelligent life.

The U.S. space agency has approved a financial award for researchers to look for evidence of progressive technology on other planets in the universe. Scientists call such evidence "technosignatures."

NASA describes technosignatures as "signs or signals, which if observed, would allow us to infer the existence of technological life elsewhere in the universe."

The best-known technosignatures are radio signals that scientists have identified coming from outer space. But NASA notes, "there are many others that have not been explored fully." 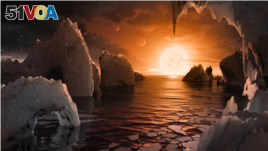 This illustration shows the possible surface of TRAPPIST-1f, one of the newly discovered planets in the TRAPPIST-1 system.

Improvements in space technology have led to the discovery of many new planets that researchers want to study.

Since 1995, scientists have discovered more than 4,000 exoplanets. These are planets that orbit a star outside the solar system. Some exoplanets have already been identified as having similarities to Earth that could possibly support life forms.

Scientists have long centered their research of other planets on "biosignatures." These are chemical or physical markers suggesting the presence of simple life forms elsewhere in the universe.

But in recent years there has been increased interest in studying technosignatures, including among NASA scientists.

The new NASA-supported study is a joint project involving researchers from the University of Rochester in New York, Harvard University and America's Smithsonian Institution.

A statement from the University of Rochester said it is the first NASA-backed project to explore non-radio technosignatures. The NASA award "represents an exciting new direction for the search for extraterrestrial intelligence," the statement said.

The research will attempt to seek answers to two main questions. Could there be technosignatures created by a civilization on another planet that can be seen from Earth? And, could these technosignatures be even easier to identify than biosignatures?

The researchers plan to begin their work by examining two possible technosignatures that might provide evidence of technological activity on other planets.

One thing they will search for is signs of solar panels. One of the project's leaders, University of Rochester professor Adam Frank, says some planets might be getting energy from a star, just as Earth gets energy from the sun. "Using solar energy would be a pretty natural thing for other civilizations to do," Frank said.

He said evidence of solar energy usage could be discovered by the presence of light waves that could be reflecting off solar panels. The researchers will attempt to identify where these waves might appear to help in the search for technosignatures.

The other thing the scientists will start looking for is evidence of pollutants in the atmosphere of other planets.

There has already been a lot of research aimed at finding biosignatures from chemicals identified in planetary atmospheres. This research, however, has centered on chemicals produced naturally by life, such as methane gas.

The new search for technosignatures will be aimed at finding evidence of artificial chemicals and gases that could be produced by widespread industrial activity by another civilization.

The researchers said their search for signs of possible intelligent life will also include evidence of city lights, very large structures and big collections of satellites.

Another project leader is Avi Loeb, an astronomy professor at Harvard. He said in a statement he hopes the new research will lead to new discoveries about "alien technological civilizations that are similar to or much more advanced than our own."

Loeb added that the general question the scientific team will seek to answer is: "Are we alone?" But he added, "Even if we are alone right now, were we alone in the past?"

Bryan Lynn wrote this story for VOA Learning English, based on reports from the University of Rochester, the Center for Astrophysics and NASA. Hai Do was the editor.

infer – v. form an opinion or guess that something is true because of the information you have

panel – n. a piece of equipment that attaches to the surface of something

reflect – v. to send back or bounce off

artificial – adj. made by people, often as a copy of something natural

alien – n. relating to creature from another planet