Update Required To play the media you will need to either update your browser to a recent version or update your Flash plugin.
By Pete Musto
28 January, 2018


United States government agencies say the first tests of a very small nuclear power system designed for missions to Mars have been successful.

The American space agency NASA and the Department of Energy recently announced the results in Las Vegas, Nevada.

The officials said they will carry out a full test of the system in March.

The goal is to provide energy for future missions in space and possibly on the surface of Mars and other planets in our solar system.

NASA astronauts visited the surface of Earth's moon six times between 1969 and 1972. But establishing a long-term colony on the surface of the moon or another planet is more difficult. Such missions need a power source strong enough to support a base but small and light enough for transport through space.

He said, "Mars is a very difficult environment for power systems, with less sunlight than Earth or the moon, very cold nighttime temperatures, very interesting dust storms that can last weeks and months that engulf the entire planet." 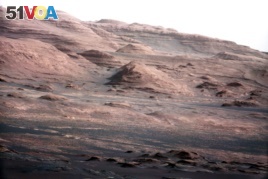 FILE - The base of Mars' Mount Sharp is pictured in this August 27, 2012 NASA handout photo taken by the Curiosity rover.

He said that Kilopower's small size and strength make it possible to transport several of the systems on a single landing vehicle. They would then be able provide a colony or base with tens of kilowatts of power.

Lee Mason is NASA's expert on power and energy storage. He said Mars has been the main goal of the Kilopower project. He also noted that a human mission to Mars likely would require 40 to 50 kilowatts of power.

Dave Poston is the chief reactor designer at the Los Alamos National Laboratory. He said that testing on parts of the system have been "greatly successful."

"The models have predicted very well what has happened, and operations have gone smoothly," he noted.

NASA's test design of the nuclear power system uses a reactor core made of the substance uranium-235. The core is about the size of a roll of paper towels.

The technology could power life-support systems for people. It could help astronauts mine for resources, recharge vehicles and run equipment. Some equipment could change things such as ice on the planet into oxygen, water and fuel.

Will Dunham reported this for the Reuters News Service. Pete Musto adapted it for VOA Learning English. Mario Ritter was the editor. How do you think this new energy system will change the space exploration and discovery? We want to hear from you. Write to us in the Comments Section or on 51VOA.COM.

mission –n. a task or a job given to a person or group

solar system –n. all the planets and other objects that orbit the sun

source –n. the provider of something that is needed or wanted

engulf –v. to flow over and cover

reactor –n. a device (usually a large device) that produces energy from a nuclear reaction

paper towels –n. sheets of paper that are used for cleaning which usually come in rolls