Update Required To play the media you will need to either update your browser to a recent version or update your Flash plugin.
By Bryan Lynn
29 July 2020


The United States is preparing to return to the planet Mars. The U.S. space agency NASA plans to have a spacecraft, called Perseverance, deploy a rover on the planet's surface. The vehicle has been called the brainiest Martian rover yet. NASA officials say its mission will be to search for signs of life on the Red Planet.

This will be the space agency's fifth rover to explore Mars. The first, named Sojourner, was sent in 1997. Then came Spirit and Opportunity, which landed in 2004. The fourth rover, Curiosity, has been exploring the planet since 2012.

The missions have resulted in valuable information. The vehicles helped gather data showing Mars was not always the cold and empty place it is today. Experiments provided evidence that at one time, the planet held several chemical elements that may have supported life. These included running water, organic molecules, and a more favorable climate. 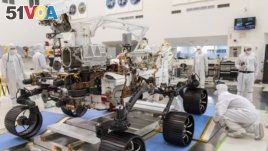 In this Dec. 17, 2019 file photo made available by NASA, engineers monitor a driving test for the Mars rover Perseverance in a clean room at the Jet Propulsion Laboratory in Pasadena, Calif. (J. Krohn/NASA via AP, File)

In 2018, Curiosity found large amounts of organic molecules in 3.5 billion-year-old rock in an area that once had a large lake. Scientists have yet to show that the molecules were a product of biological processes linked to life as we know it.

NASA says Perseverance "aims to take the next step" in searching for signs of ancient microbial life. The rover will also study the planet's climate and surface materials.

Perseverance is NASA's largest, heaviest and most technology-loaded vehicle ever sent to Mars. The six-wheeled rover is three meters long, a little over two meters tall and weighs 1,000 kilograms. It has 19 cameras, two microphones and a two-meter-long robotic arm.

A machine connected to the robotic arm will drill down into the surface to gather rock and soil samples. These particles will then be put in special tubes and stored away for eventual return to Earth. NASA says the tubes went through an extreme cleaning and baking process to remove any microorganisms from Earth.

A mission to collect the samples is planned for 2026. NASA said that back on Earth, "we can investigate the samples with instruments too large and complex to send to Mars."

The rover is equipped with X-ray and imaging systems to study the chemical makeup of Martian surface materials and to identify possible organic compounds.

It will be a long trip for Perseverance, which is expected to reach the Jezero Crater on Mars in February 2021. The area is 45 kilometers wide and sits just north of the planet's equator.

Researchers suspect that a river flowed into a large body of water at Jezero between 3 and 4 billion years ago. This was the main reason the crater was chosen for the Perseverance mission, notes NASA project scientist Ken Farley.

The crater area is a promising place "for finding organic molecules and other potential signs of microbial life," he added.

One experiment planned for Perseverance will involve a device designed to convert carbon dioxide from Mars' atmosphere into oxygen. The experiment aims to demonstrate a way to produce the important gas, which could be used by astronauts or as fuel on future missions.

Perseverance also is carrying a small experimental helicopter called Ingenuity. NASA says the 1.8 kilogram-aircraft will attempt its first flight a few months after arrival on Mars. NASA officials hope it will be the first helicopter to ever fly on another planet.

Ingenuity project leader MiMi Aung told The Associated Press the helicopter will start out like a baby bird, attempting to rise about 3 meters off the surface. It will then try to push forward into the planet's extremely thin atmosphere. Other flight tests will be carried out, with Ingenuity trying to go a little higher and farther each time. "It really is like the Wright brothers' moment," Aung said.

If the tests are successful, such helicopters could assist astronauts on future search and collection missions.

Bryan Lynn wrote this story for VOA Learning English. His story was based on reports from NASA, The Associated Press, Reuters and Agence France-Presse. George Grow was the editor.

drill– v. to make holes in hard materials with a machine

sample – n. a small amount of something to represent what the rest is or should be like

baking – n. making something hot by heating it

equator – n. an imaginary line drawn around the middle of a planet

convert – v. to cause to change in form