Near Total Lunar Eclipse to Happen on Friday

Update Required To play the media you will need to either update your browser to a recent version or update your Flash plugin.
By Bryan Lynn
17 November 2021


A nearly total lunar eclipse is set to happen on Friday and people in many parts of the world will be able to see it. 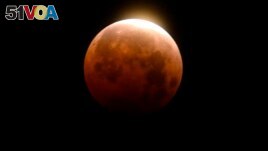 Friday's lunar eclipse will be visible in all of North America, as well as large parts of South America, eastern Australia and northeastern Asia. It will not be visible to people in the Middle East, most of Africa, Eastern Europe and central Asia.

Eclipse watchers in North America and the Pacific will be able to witness the full event in late evening Thursday or in the early morning hours of Friday. The partial lunar eclipse can also be seen in South America and Western Europe early Friday morning.

People in other areas – including New Zealand, Australia, Japan, China and Southeast Asia – will be able to see parts of the eclipse beginning in late afternoon or evening hours on Friday.

A lunar eclipse happens when the sun, Earth and moon line up in such a way that the moon passes into the darkness of Earth's shadow. The eclipse will happen over several different stages.

NASA says the eclipse is expected to reach its peak at 9:03 UTC time. The moon will look darker and appear to turn a reddish-brown color. This happens because the only sunlight reaching the moon passes through Earth's atmosphere.

"The more dust or clouds in Earth's atmosphere during the eclipse, the redder the moon will appear," NASA said in a statement. "It's as if all the world's sunrises and sunsets are projected onto the moon."

The upcoming eclipse is happening during a full moon. Ancient cultures around the world gave names to the 12 full moons that happen throughout the year.

In North America, traditional names are given to full moons. NASA says many of these names came from Native Americans. Some were first published by the Farmers' Almanac, in the northeastern state of Maine, in the 1930s.

Traditional names for the November full moon include the Beaver Moon, the Frost or Frosty Moon and the Snow Moon. Because of the current full moon name, Friday's event has been widely publicized as the Beaver Moon partial lunar eclipse.

One interpretation of the Beaver Moon is that mid-autumn was traditionally the time for hunters seeking beaver fur to set their traps before waters froze. NASA notes that another reason for the name could be linked to how active beavers are during the autumn as they prepare for winter.

The terms frost, frosty and snow in the other names describe the frosts and early snowfall that usually begin at this time of year in many parts of the U.S.

Bryan Lynn wrote this story for VOA Learning English based on reports from NASA. Hai Do was the editor.

partial – adj. part of something or not complete

stage – n. a particular time in a process

frost – n. a thin, white layer of ice that forms on surfaces when it is very cold

interpretation – n. an explanation or opinion of what something means

fur – n. the thick hair that covers the bodies of some animals