Update Required To play the media you will need to either update your browser to a recent version or update your Flash plugin.
By Dan Friedell
05 December 2021


Scientists are taking a second look at footprints made in ash from a volcano millions of years ago in modern-day Tanzania.

The footprints were first found in the 1970s. Scientists started taking another look at them in 2019. They were surprised to discover that the footprints in the ash were made by two different species. 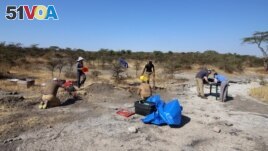 Researchers work at a site called Laetoli in northern Tanzania, where they found five fossilized footprints dating from 3.66 million years ago. Shirley Rubin/Handout via REUTERS

Ellie McNutt of Ohio University is the lead writer of the study published in Nature. McNutt noted the tracks are the first evidence of walking on two feet in the human fossil record.

Jeremy DeSilva of Dartmouth College co-wrote the study. DeSilva said the footprints show there were different ways of walking upright at that time. That is because the set of footprints discovered in 1978, also from the area, show a different way of walking. The footprints found in 1978 have been linked with the human ancestor known as Australopithecus afarensis. That is the family of early humans that ‘Lucy' belongs to. Lucy is a famous group of bones found in Ethiopia in 1974.

Years ago, scientists did not think the footsteps found in 1976 were connected to humans because one foot crossed over the other as the being walked. This is called "cross-stepping," DeSilva said. He called it "peculiar."

The scientists believe the being which made the newly found steps was about one meter tall. But they can only guess about other qualities it might have had.

DeSilva said it is possible the steps were taken by an unknown human ancestor or it could have been one already known.

Scientists say the ancestors of modern humans separated from chimpanzees between 6 and 7 million years ago. Walking on two feet was an important evolutionary step. So, scientists are excited by the new finding.

Changes in the bones of the hips, spine, feet and legs permitted human ancestors to walk upright. This happened millions of years before modern human beings, known as homo sapiens, appeared 300,000 years ago.

Scientists think the changes might have happened so that early humans could better see dangerous animals in the African grasslands.

Dan Friedell adapted this story for Learning English based on reporting by Reuters. Mario Ritter, Jr. was the editor.

What do you think of the new footprint discovery? Tell us in the Comments section and visit 51VOA.COM.

ash – n. the remains of something that has been burned up

tracks – n. (pl.) a mark left on the ground by a moving animal, person, or vehicle — usually plural

fossil – n. something (such as a leaf, bones, or a footprint) that is from a plant or animal which lived in ancient times and that has become mineralized into rock

footprint – n. the mark left by someone's foot or shoe

peculiar – adj. not usual or normal

evolution – n. a theory that the differences between modern plants and animals are because of changes that happened by a natural process over a very long time