Update Required To play the media you will need to either update your browser to a recent version or update your Flash plugin.
By VOA
29 November 2020


New research suggests huge floods once flowed through an area on Mars. Scientists say the finding could be a new sign that the planet may have once had the right conditions to support some form of life.

The evidence comes from data collected by NASA's Curiosity rover, an exploration vehicle. Curiosity landed on Mars in 2012 and has been exploring the planet's Gale Crater ever since. Scientists believe Gale Crater was formed when a meteor hit Mars in its early history, about 3.5 to 3.8 billion years ago.

Scientists have already collected evidence suggesting that Mars once had a lot of water. In 2015, NASA's Curiosity team said the rover had gathered evidence showing that the Red Planet could have stored water in large lakes billions of years ago. 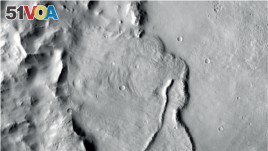 Example of features identified in a deep basin on Mars that show it was influenced by groundwater billions of years ago. (Image credit: NASA/JPL-Caltech/MSSS)

Last year, European researchers reported that they had discovered the first evidence of a huge groundwater system that once existed below the surface of Mars. Another study from 2019 suggested that Gale Crater was also once home to a number of large, salty lakes.

Scientists have long linked the complex history of water on Mars to whether or not life ever existed on the planet.

The evidence that supported the earlier findings is similar to the latest evidence provided by the NASA rover. The data centers on formations - made by water and sediment – observed by Curiosity in the Gale Crater.

But the new findings, described in a study appearing in Nature Scientific Reports, suggest that huge "megafloods" once flowed through the area.

Alberto G. Fairén is a visiting astrobiologist at New York's Cornell University. He helped lead the research and was a co-writer of the study.

"We identified megafloods for the first time using detailed sedimentological data observed by the rover Curiosity," he said in a statement. Fairén added that such deposits, "left behind by megafloods," had not been identified by any past Mars observations.

The scientists believe the most likely cause of huge Mars flooding "was the sudden heat produced by a large impact," the study states. Heat from the meteor hit likely caused melting ice from frozen bodies of water to release carbon dioxide and methane into the atmosphere.

The study suggests this event led to a temporary change on Mars from a cold, dry climate to a warm, wet period. This led to extended, heavy rainfall across the planet. This water "combined with water roaring down from (a mountain inside Gale Crater) to cause gigantic flash floods," the study said.

The evidence includes Curiosity observations of large, wave-shaped elements in sedimentary layers of the Gale Crater. The researchers describe these elements as "antidunes," small sand hills that form from water flows. The observed antidunes were about 9 meters high and spaced about 137 meters apart, said Ezat Heydari. He is a professor of physics at America's Jackson State University in Mississippi and a co-writer of the study.

Heydari said the antidunes are evidence of flowing megafloods at the bottom of the Gale Crater about 4 billion years ago. He noted that they are exactly like elements formed by melting ice on Earth about 2 million years ago.

Growing evidence of a habitable planet

Cornell's Fairén said the evidence from early Mars suggests that geologically, it was "an extremely active planet." Mars "had the conditions needed to support the presence of liquid water on the surface," he added.

The latest study adds to growing evidence that Mars had the conditions to be a habitable planet. Fairén says scientists will now attempt to uncover evidence that it was, in fact, inhabited.

He noted such evidence could come from NASA's newest rover, Perseverance. The Mars explorer – which NASA calls its brainiest rover yet – launched into space on July 30.

Perseverance, which will aim to search for new signs of life on Mars, is set to reach the planet's Jezero Crater in February 2021.

Bryan Lynn wrote this story, based on reports from Cornell University, Nature Scientific Reports and NASA. Hai Do was the editor.

meteor – n. a rock from outer space that becomes very hot and burns brightly in the sky as it enters Earth's atmosphere

sediment – n. a solid substance that forms a layer at the bottom of a liquid

deposit – n. a layer of a substance that has developed from a natural or chemical process

impact – n. ta powerful effect something has on a particular person or situation

roar – v. moving fast and in a powerful way

geologic – adj. the study of the rocks and similar substances that make up the Earth's surface