Update Required To play the media you will need to either update your browser to a recent version or update your Flash plugin.
By Caty Weaver
27 March 2020


It has been almost six-and-a-half-years since the American music group Pearl Jam released an album. That changed Friday when the band dropped its eleventh collection, Gigaton.

Many dictionaries define the word as an explosive force equal to one billion tons of TNT, an industrial explosive. Critics have noted that this new album includes hard rock. Reviews are filled with words like fury, thunder, and hammering. Entertainment Weekly calls the music "a gathering storm of guitars." 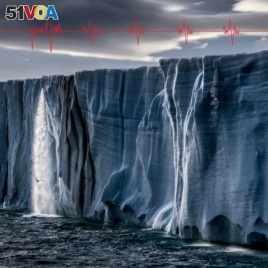 In other words, there is some loud and wild music on Gigaton. But most reviews agree that Pearl Jam continued to experiment with less traditional rock and roll sounds on the album.

One of the new songs, Superblood Wolfmoon, has elements of danceable punk rock music of the early 1980s.

But – back to the name of the album – Gigaton can also mean the weight or mass equal to 1 billion tons. The word is most often used these days in stories related to climate science and environmental destruction. In fact, former U.S. President Barack Obama famously defined the word during a 2015 speech about climate change in Alaska and the Arctic.

He discussed the huge, yearly loss of ice from Alaska's glaciers: "75 gigatons — that's 75 billion tons — of ice each year," he said. Obama compared the amount to the size of the National Mall in Washington, D.C. as if it were a solid block that stood almost 700 meters tall. "Now imagine 75 of those ice blocks. That's what Alaska's glaciers alone lose each year."

And climate change issues are at the heart of Pearl Jam's Gigaton. The album picture shows icefalls in Svalbard, Norway. Svalbard is one of the northern-most human settlements in the world. Some climate scientists say it is warming faster than any other place.

Pearl Jam has been active in environmental causes for most of its 30-year existence. The band and its members have won honors for raising money, climate change educational efforts and more. They also invest money in environmental health projects to reduce the group's carbon footprint.

Pearl Jam was entered into the Rock and Roll Hall of Fame in 2017. Lead singer Eddie Vedder's opening comments were about the environment.

"So, climate change is real," he said. "And we... we cannot... cannot be the generation that history will look back upon and wonder, why didn't they do everything humanly possible to solve this biggest of crises in our time."

Gigaton makes a similar appeal to listeners in every song. As Vedder sings in the song, Quick Escape, "And we think about the old days, of green grass, sky and red wine. Should've known, so fragile. And avoided this one-way flight."

review –n. a piece of writing that gives an opinion about a cultural work or art

hammering –n. the loud sound made when something is hit with a hammer

carbon footprint –n. the amount of gasses, linked to climate warming, that are released by an activity

fragile –adj. something that is easily damaged