Update Required To play the media you will need to either update your browser to a recent version or update your Flash plugin.
By Phil Dierking
05 August, 2018


The Hope Diamond is one of the world's most famous jewels. It was in the possession of a series of people: kings, bankers, rich women and thieves, before its arrival 60 years ago at the Smithsonian Institution in Washington, D.C.

A rare blue diamond, it has a complex social history, to be sure. But, far more so is its geological history, researchers say in a new report.

"This is the first time anyone has come up with a fact-based study or model for how blue diamonds form," said Gemological Institute of America research scientist Evan Smith. He led the study published in the journal Nature.

The group looked at 42 blue diamonds, including one from South Africa that recently sold for $25 million in 2016. Researchers could tell where the stones were formed based on the very small minerals trapped inside.

The scientists found the gems can form at least 660 kilometers below the earth's surface, in a part called the lower mantle. 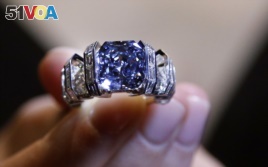 Diamonds are a hard, clear form of pure carbon called a crystal. They form under extreme heat and pressure. The report says that blue diamonds crystallize alongside water-bearing minerals that long ago were part of the floor of the sea. But these minerals were pushed deeper underground during the movement of large tectonic plates that shape the Earth's surface.

Scientists already knew these diamonds received their blue color from the element boron. The study says that boron had once been in ocean water but was eventually pushed into the seafloor rock. Over millions of years, the boron continued to move deep underground.

Many diamonds appear colorless. Often, however, they have some yellow color. Still others have a light brown, pink or green color. About 99 percent of all diamonds form somewhere between 150 to 200 kilometers underground, a far shallower birthplace than their blue relations.

"These diamonds are among the deepest ever found," Carnegie Institution for Science geochemist Steven Shirey said of the blue diamonds.

The public can see the Hope Diamond at the Smithsonian National Museum of National History in Washington D.C.

Reuters' Will Dunham reported this story. Phil Dierking adapted it for VOA Learning English. Caty Weaver was the editor.

Have you ever seen a blue diamond or other rare jewel? Write to us in the Comments Section or on 51VOA.COM.

bear - v. to accept or endure (something)

geological - adj. having to do with the science that studies rocks, layers of soil, etc., in order to learn about the history of the Earth and its life

gem - n. a valuable stone that has been cut and polished for use in jewelry

tectonic plates - n. a small number of plates which float on and travel independently over the mantle and much of the earth's seismic activity occurs at the boundaries of these plates.