Update Required To play the media you will need to either update your browser to a recent version or update your Flash plugin.
By Susan Shand
30 January, 2018


Scientists and American space agency officials led efforts by the United States to develop a space-based missile defense system in the 1980s.

Now, those same individuals are urging the U.S. government to re-start work on the anti-missile program. They say it could help answer nuclear threats from North Korea and other rogue countries.

There were false reports of a North Korean missile attack on Hawaii earlier this month. North Korea says its missiles have the ability to reach the U.S. mainland.

The U.S. Space Defense Initiative (SDI) was started over 30 years ago during the presidency of Ronald Reagan. SDI was called "Star Wars" by critics in the U.S. Congress and media. They questioned its high cost. 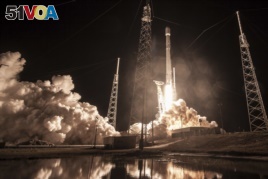 This Jan. 7, 2018 photo made available by SpaceX shows the launch of the Falcon 9 rocket at Cape Canaveral, Fla., for the "Zuma" U.S. satellite mission.

Many people also questioned its effectiveness against the Soviet Union's large number of highly-developed nuclear weapons.

The program never got past the planning stage and was largely ended after the collapse of the Soviet Union.

"Everybody lost interest in SDI when the Soviet Union collapsed," says Robert Scheder, who works for the RAND Corporation.

Scheder designed the first model for a space-based defense. He said that the nuclear threat from North Korea, and improvements in technology over the past 30 years, show the need for SDI.

In the 1980s, Scheder carried out experiments with a weapon system made of orbiting rockets. They had sensor technology that could stop attacking missiles immediately after launch, before they can release decoys and countermeasures.

But there were major technological problems.

But he now believes they could provide fail-safe protection against the threat now posed by North Korea, which can only launch at most three or four missiles at a time. Scheder spoke to VOA from his home in Spain.

Thomas Roberts, a critic of space-based defense, works at the Center for Strategic and International Studies in Washington, D.C. He says that even a few missiles could get through the defense system.

"The enemy can first launch a decoy," Roberts said, which would make a hole in the system that other missiles could pass through.

At least 1,600 "killer" satellites would be needed to fully cover the Earth. The estimated $100 billion cost for placing thousands of Brilliant Pebbles in orbit would have used up all of the money the U.S. spent on defense in the 1980s.

"The much smaller size of satellites...would limit the cost," he noted.

Commercially available space technology that is produced by Tesla and other businesses would also lower costs and shorten deployment time. That's the belief of experts with NASA, the National Aeronautics and Space Administration.

Roberts said it would cost at least $70 billion.

Government support for SDI research was stopped when Bill Clinton was U.S. president. Plans to restart it under President George W. Bush were suspended because of anti-terrorism efforts and the wars in Afghanistan and Iraq.

Growing concern with North Korea has moved the U.S. Congress to request new money for space weapons research. The House of Representatives' Armed Services Committee made the request in a recent letter to President Donald Trump and his administration. 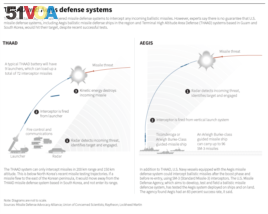 Experts say there is no guarantee that U.S. missile defense systems, including Aegis ballistic missile defense ships in the region and Terminal High Altitude Area Defense (THAAD) systems based in Guam and South Korea, would hit their target.

Experiments have shown that THAAD and the Navy's AEGIS system have a 50 percent chance of stopping ICBMs when they re-enter the atmosphere.

They are "weapons designed to protect points in a set piece battle scenario," Scheder said. But effective protection for whole countries or areas under threat by countries like North Korea can only be provided by satellite-operated area defense, he added.

Critics of space-based weapons point to the possibility that a satellite could make a mistake when trying to identify a hostile launch.

Defensive missiles could also be destroyed as they re-enter the atmosphere before hitting an enemy missile.

Scheder also says that the Smart Rock is a solid missile built to destroy a rocket without an explosion. As a result, its collateral damage would be limited.

An enemy ICBM has about 20 minutes in space when it could be hit, but "once it's re-entered the atmosphere, land-based missiles have only seconds in which to hit it," Scheder said.

Some weapon systems considered for SDI, like lasers, could not provide enough protection, he added.

There is also the theoretical danger that a rogue nation or group with highly developed cyber war ability could attack the system and use it against the United States or its allies.

But difficulties in overpowering a U.S. anti-missile system could persuade enemy nations that nuclear war is futile, said Scheder.

He noted that the cost of the 1980s "Star Wars" program caused the Soviet Union to end its arms race.

rogue – n. someone or something that causes trouble

stage – n. a point or period in the development of something

interceptor - n. something that stops an object mid-flight

fail-safe – adj. causing a piece of machinery to return to a safe condition in the event of a breakdown or problem

anti-ballistic – adj. of or relating to stopping missiles while in flight

commercial – adj. related to the buying and selling of services

collateral – adj. related but not in a direct or close way

cyber – adj. of or related to computers or computer networks