Update Required To play the media you will need to either update your browser to a recent version or update your Flash plugin.
By Mario Ritter
13 September, 2017


Foreign-supported educational centers in North Korea are reducing their activities as more governments strengthen travel warnings for the country.

The United States recently banned most travel by Americans to North Korea. North Korea also remains under a series of United Nations Security Council restrictions. South Korea, the U.S. and other nations have also placed their own restrictions on the North because of its nuclear and missile testing activities.

Britain also has announced additional travel warnings for its citizens, which have affected education links with North Korea. 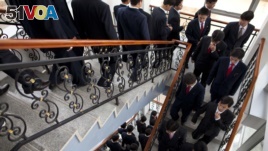 FILE - In this Oct. 5, 2011 photo, shows students at Pyongyang University of Science and Technology. According to the chancellor of the school, North Korea has detained a U.S. citizen who taught at the school, Tony Kim, who also goes by his Korean name Ki

The Council added that it is delaying talks on extending its program in North Korea.

The British Council has operated the English Language Teacher Training Program (ELT program) since May of 2000. That year, Britain established diplomatic relations with North Korea to support "critical engagement" with the country. The effort was aimed at reducing the country's isolation through educational and cultural exchanges.

The Council has trained more than 4,000 English teachers in Pyongyang.

Four teachers were involved in the suspended program.

The Council made its decision because the British Foreign and Commonwealth Office increased its travel warning for North Korea on September 3.

The office "advises against all but essential travel to North Korea."

It adds, "There remains a threat of further missile or nuclear tests, which could lead to further instability in the region."

On September 1, the United States banned most travel by its citizens to North Korea.

That ban already may have affect education links to North Korea.

Last week Pyongyang University of Science and Technology released a statement. The university, known as PUST, said classes had been "adapted to suit the available resources."

PUST is a private university that is supported mostly by Western, Christian groups. It educates the children of ruling families in North Korea.

Sixty to 80 foreign professors work at the university during each semester. A university statement says about half of them have U.S. passports.

The university did not say how many American teachers will be affected by the U.S. travel ban. PUST noted it expects that additional teachers will join during this fall learning period.

However, some of the university's teaching activities seem to have been restricted. One professor at PUST told VOA that only North Korean professors teach classes in dentistry this fall. The professor said the U.S. measure is affecting not only American citizens but other foreign nationals.

The professor asked not to be identified.

Another PUST employee, who asked not to be identified, said he would not be returning to Pyongyang this fall. The employee said the aid agency that organizes the teaching trips decided not to send anyone to the school at this time.

The U.S. State Department first announced the travel ban in July after North Korea tested two long-distance missiles. It warned of growing concerns over "the serious risk of arrest and long-term detention" to Americans traveling to and within North Korea.

The ban permits exceptions for some humanitarian or other special purposes, although they require approval.

Kim Hyunjin reported this story for VOA News with contributions from Jenny Lee. Mario Ritter adapted it for VOA Learning English. Caty Weaver was the editor.

engagement –n. the state of being involved with something

isolation –n. to be separated from other, to be alone

essential –adj. the most important and necessary

instability –n. easily changed or likely to be changed

region –n a part of a country or of the world

adapt –v. to change in order to better deal with a place or situation

suit –v. to provide something needed, to be suitable

evangelical –adj. relating to a Christian group who stress the importance of Biblical writings and preach those beliefs

faculty –n. teachers at a school, college or university