Now that China Has Landed on Mars, What Is Next for the Mission?

Update Required To play the media you will need to either update your browser to a recent version or update your Flash plugin.
By Bryan Lynn
23 May 2021


China recently made history by successfully landing a spacecraft on Mars. The event marked a major step in China's space program and launched a new international exploration effort on the Red Planet.

China's official Xinhua News Agency announced the landing on May 15. "China has left a footprint on Mars for the first time, an important step for our country's space exploration," it said.

China's space program had already completed several successful unpiloted missions to the moon. The country's last spacecraft to land there was able to successfully collect material from the lunar surface. It was the first time in more than 40 years that any nation had collected moon material for return to Earth. 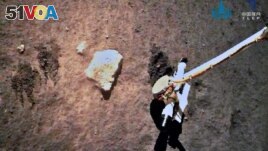 Landing a spacecraft on Mars, however, is much more difficult than landing on the moon. The vehicles require special equipment to protect against the extreme heat of the Martian atmosphere. The spacecraft also require special rockets to slow its speed and parachutes that deploy at just the right time to prevent crash landings.

Historically, there have been many crash landings on Mars. So far only three nations -- the United States, China and the Soviet Union (USSR) -- have successfully landed spacecraft.

The U.S. has had nine successful Mars landings since 1976. This includes its latest mission involving the U.S. space agency NASA's Perseverance explorer, or rover. The USSR's Mars 3 spacecraft landed safely in 1971. But that mission ended seconds later when the spacecraft's instruments failed.

There are currently other spacecraft operating in orbit around Mars. One was launched by the United Arab Emirates and arrived in February. The Emirates Mars Mission is studying Martian atmospheric conditions from an extremely high orbit. Three other orbiting spacecraft belong to the U.S., two are European and one is from India.

China's Tianwen-1 spacecraft -- which includes an orbiter, lander and rover -- spent seven months on the trip to Mars. It landed at Utopia Planitia, a large flat area in the northern half of the planet.

Its rover Zhurong was named after the Chinese god of fire. The six-wheeled vehicle is solar powered and weighs 240 kilograms, Xinhua reported. It has several cameras and other instruments that use radar, laser and sensors to measure atmospheric conditions and magnetic forces.

Zhurong is to study the planet's surface soil and atmosphere. Like the past and present NASA rovers, it will also look for signs of ancient life, including ice and any other water below the planet's surface. Data collected by Zhurong will be sent back to Earth through the Tianwen-1 orbiter. Last week, China released the rover's first pictures from Mars.

Roberto Orosei is a planetary scientist at the Institute of Radioastronomy in Bologna, Italy. He told Nature an important part of the mission could help confirm earlier studies suggesting the presence of permafrost in the area around Utopia Planitia.

The studies found evidence that permafrost could be hiding just below the surface. The rover's ground-searching radar equipment might be able to identify signs of this permafrost, Orosei said.

Learning the depth of such permafrost and finding out more about its formation could offer new information into more recent climate changes on Mars. Scientists are trying to understand what happened to ancient water they believe once covered the surface, Orosei added.

"As the international scientific community of robotic explorers on Mars grows, the United States and the world look forward to the discoveries Zhurong will make to advance humanity's knowledge of the Red Planet," his statement read. "I look forward to future international discoveries, which will help inform and develop the capabilities needed to land human boots on Mars," Nelson added.

Bryan Lynn wrote this story for VOA Learning English, based on reports from Reuters, The Associated Press, Xinhua, Nature and NASA. Caty Weaver was the editor.

permafrost – n. an area of land that is permanently frozen below the surface

advance – v. to develop or progress