Update Required To play the media you will need to either update your browser to a recent version or update your Flash plugin.
By Hai Do
28 September 2020

The newspaper said the information came from more than 20 years of tax documents that were given to its reporters from "sources with legal access." The paper said it would not share the documents so as to protect its sources.

Alan Garten is a lawyer for the Trump Organization, the group of businesses owned or controlled by Trump. Garten said that "most, if not all, of the facts appear to be inaccurate" and asked for the documents on which they were based. When the newspaper refused, he said, "Over the past decade, President Trump has paid tens of millions of dollars in personal taxes to the federal government, including paying millions in personal taxes since announcing his candidacy in 2015."

Shortly after the Times report appeared in publication, the president denounced the story as false during a Sunday press conference at the White House. He said, "I've paid a lot, and I paid a lot in state income taxes, too."

Traditionally, U.S. presidential candidates have shared their tax records with the public. But for nearly four years, Trump has refused to do so. He has said that he will release his tax returns when they are no longer under investigation by the Internal Revenue Service (IRS), the federal agency responsible for collecting taxes.

Trump and his lawyers have fought several attempts by Democratic Party lawmakers and New York state officials to study his tax records.

Former Vice President Joe Biden, the Democratic candidate for president, published his income tax returns on his campaign's website. They show that he and his wife Jill paid $93,229 in federal income tax in 2016. The Bidens paid $3.7 million in 2017 and $1.5 million in 2018. 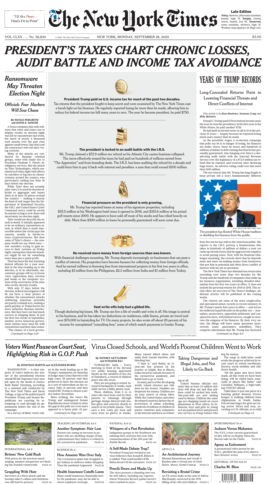 Between 2005 and 2007, the Times said Trump "paid substantial federal income taxes for the first time in his life: a total of $70.1 million." The taxes were based on his earnings from the television show The Apprentice and licensing deals.

However, Trump then claimed his businesses were losing money. In 2010, he received $72.9 million from the federal government and another $21.2 million from local and state governments. The money is now subjected to investigation by the IRS.

The Times also said Trump used money from his businesses to pay for his family's living expenses. Between 2010 and 2018, he also wrote off some $26 million in unexplained "consulting fees" as a business expense. The tax records did not identify who received the money.

The president and his business

Trump's two sons, Eric and Trump, Junior, are said to operate the Trump family businesses, but their father is still the major owner of the Trump Organization.

Since 2016, the Times reported that foreign governments, business groups and people have spent large amount of money at the president's properties. Overseas projects in the Philippines, India, Azerbaijan and Turkey also brought millions to the Trump Organization.

The Times noted that Trump is responsible for paying back $421 million in loans to banks within four years and $100 million for the loan on the Trump Tower in New York by 2022.

All of this will come at the time when many hotels, golf courses and office buildings are struggling to earn profits during the coronavirus health crisis. And if the IRS denied his appeal, Trump would have to pay an additional $100 million to the government.

Trump and Biden are making final preparations for the first presidential debate. They will meet in Ohio Tuesday night.

Reporter Chris Wallace will chair the debate. Wallace has listed several issues as possible subjects for the candidates to discuss. The New York Times report, however, will direct more attention to Trump, his taxes and businesses.

Hai Do wrote this story for Learning English based on The New York Times report. George Grow was the editor.

access - n. a way of being able to use or getting something

inaccurate - adj. not correct or exact

license - v. to permit the use of a name or property through an official agreement

expense - n. an amount of money that is needed to pay for something

fee - n. the amount of money that is paid for work done

golf course - n. a large area of land that is set up for the game of golf