Ocean on Jupiter’s Moon Europa May Have Supported Life

Update Required To play the media you will need to either update your browser to a recent version or update your Flash plugin.
By Bryan Lynn
03 July 2020


New research from the United States space agency, NASA, suggests that the ocean under the surface of Jupiter's moon Europa may have been able to support life.

Researchers found that the ocean could have been formed when some minerals broke down and released water. 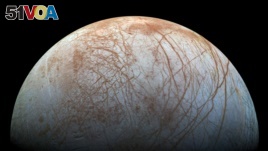 A view of Jupiter's moon Europa created from images taken by NASA's Galileo spacecraft in the late 1990's, according to NASA, obtained by Reuters May 14, 2018.

Europa is a little smaller than Earth's moon, but still one of the largest moons in our solar system. Observations of Europa by NASA spacecraft have shown that an ocean exists there beneath a thick layer of ice. Scientists estimate Europa's ocean to be 65 to 160 kilometers deep. It may contain twice the water of Earth's oceans.

The new findings came from ocean models of Europa created by NASA. The results were reported in a study presented at a recent conference of Goldschmidt, a geoscience research organization.

Mohit Melwani Daswani is a planetary scientist with NASA's Jet Propulsion Laboratory in California. He led the study.

Daswani told the Reuters news agency his team believes Europa's ocean "may have been habitable early when it formed." This is because the research suggests the water had a low level of acid and contained carbon dioxide.

Daswani said the study suggests it may have been possible for some microorganisms to use carbon dioxide in the ocean for energy to survive. Some bacteria on Earth receive life-giving energy from carbon dioxide.

"The availability of liquid water is the first step to habitability," Daswani said. "In addition, chemical exchange between the ocean and the rocky interior may have been significant in the past, so potential life may have been able to use chemical energy to survive," he added.

In other words, Daswani said, the makeup of Europa's ocean may have been very similar to oceans on Earth. "We believe that this ocean could be quite habitable for life."

The new study examined whether Europa was habitable in the past, but did not look at its present ability to support life. Daswani said that is a question researchers are now exploring.

He added, however, just because a planet or moon is believed to be habitable does not mean that life is actually present. "Just that the conditions could allow for the survival of some extremely hardy forms of life that we know of on Earth," he noted.

The researchers believe Europa offers one of the best chances of finding life in our solar system. In the future, however, they say they will seek to create models to study other moons. These could include Europa's neighbor, Ganymede - the largest moon in our solar system - and Saturn's moon, Titan.

Reuters reported on this story. Bryan Lynn adapted the report for VOA Learning English, with additional information from the Goldschmidt Conference. Mario Ritter, Jr. was the editor.