Update Required To play the media you will need to either update your browser to a recent version or update your Flash plugin.
By Caty Weaver
24 July, 2019


A pair of Nike company running shoes from 1972 sold for a record-breaking $437,500 in a public auction Tuesday.

The so-called Nike "Moon Shoe," was one of the first Nike shoes. They were designed the for runners at the 1972 Olympic trials.

The sale was made at Sotheby's auction house in New York. Officials there said the price set a new a record for a pair of sneakers. Canadian investor and car collector Miles Nadal bought the shoes. Nadal last week paid $850,000 for 99 other pairs of rare or limited-collection sneakers that Sotheby's was offering. 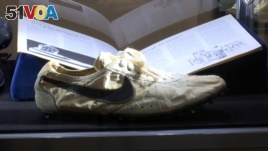 Before Tuesday, the highest price at a public auction for sneakers was $190,373 in California in 2017. That was for a pair of signed Converse shoes that basketball star Michael Jordan reportedly wore in the 1984 Olympic finals, Sotheby's said.

Sotheby's is best known for selling art works for tens of millions of dollars. But it has been working with streetwear marketplace Stadium Goods to auction 100 pairs of the rarest sneakers ever produced.

The handmade "Moon Shoe," was one of only 12 pairs ever made. The pair sold Tuesday are the only ones known to exist in an unworn condition, Sotheby's said.

Nadal expressed excitement about his purchase. He called the "Moon Shoe" a "true historical artifact in sports history and pop culture."

He said he plans to show them, along with his 99 other newly bought shoes, at his private automobile center in Toronto.

Noah Wunsch is the head of international eCommerce at Sotheby's. He said the sneaker auction brought together art, culture and fashion.

"We are eager to see where this sale takes us, not only in future sneaker offerings, but also in other new luxury lifestyle areas," Wunsch said.

pair -n. two like things designed for use together

auction -n. a sale of property to the highest bidder

sneakers -n. a sports shoe with a pliable rubber sole

artifact -n. something characteristic of or resulting from a particular human institution, period, trend, or individual

eager -adj. marked by enthusiastic or impatient desire or interest

luxury -n. a condition of abundance or great ease and comfort