Update Required To play the media you will need to either update your browser to a recent version or update your Flash plugin.
By Hai Do
21 September 2020


It has been a year of severe pain and suffering in the United States. This week, the number of coronavirus deaths is set to reach 200,000, the highest of any country.

For many, the grieving process has taken place at a distance, away from hospitals, funerals and gathering places with family and friends.

In New York, Anthony and Rosemary Terio died five days apart in separate hospitals last spring. They were married for 65 years. One of their daughters, Lisa Terio-Heath, witnessed the loss of her parents to the coronavirus from her home in Greensboro, North Carolina, 862 kilometers south.

"This pain will never go away for me," Lisa Terio-Heath told Reuters.

At a Houston hospital earlier this month, Angelica Mendez was permitted to spend less than an hour with her mother Catalina. The 86-year-old woman died because of COVID-19 later in the day, leaving seven children and more than 30 grandchildren to mourn her.

Eight in 10 Americans who died from the virus were 65 or older. A report from Yale University found that Blacks and Hispanics are more likely to die from the virus than white people.

The virus, however, leaves behind many kinds of victims. 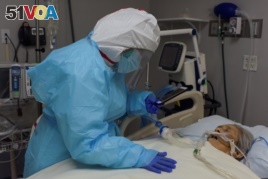 While FaceTiming her siblings, Angelica Mendez, 48, says goodbye to her mother, Catalina Salazar, 86, who is struggling to fight the coronavirus disease (COVID-19), and who died later in the day at United Memorial Medical Center in Houston, Texas, U.S., S

In Waldwick, New Jersey, Pamela Addison's 10-month-old son Graeme does not seem to know his father is missing. But her daughter Elsie is receiving help to deal with the death of her father. He died a month after celebrating her second birthday with balloons.

"She's having a difficult time adjusting to the fact he's not coming home," Addison told the Associated Press.

Ramon Ramirez recently died from COVID-19 just four months after burying his wife who died from the same disease. He had one final request to his oldest daughter, Marlene Torres: "Take care of your brothers." Torres now finds herself taking care of her four brothers and sisters in addition to her own two children.

Anadelia Diaz of Lake Worth, Florida turned 56 the day she buried her 29-year-old daughter Samantha. The young mother of three died of COVID-19. Diaz prayed that she will live long enough to raise the three grandchildren. "All I ask God is for our health and for strength, nothing else," she said.

Ramath Mizpeh Warith would work late at night as a bus driver in Cleveland, Ohio to support his wife, Sierra. She was attending classes while expecting their second child. They were both infected with the virus. She died without having enough strength to hold the newborn son after birth. Warith knows that he will tell them someday.

The first reported coronavirus death appeared in Wuhan, China in early January. As thousands of new cases were reported in China, officials closed down the city of 11 million people.

The U.S. followed with a travel ban of any foreigners who had come from China. But it was too late. A man in Seattle was reported to be the first to die from COVID-19 in the U.S. on February 29.

By May 27, four months after China's first confirmed case of a COVID-19 death, more than 100,000 deaths in the U.S. were reportedly from the virus. This week, the official number of deaths from the virus is set to reach 200,000. It is possible that the real number could be higher.

Ronald Fricker is a professor of statistics at Virginia Tech University. He wrote in The Conversation that "the number of deaths in the United States through July 2020 is 8 percent to 12 percent higher than it would have been if the coronavirus pandemic had never happened."

Through the end of July, Fricker said the U.S. has already seen more than 200,000 extra deaths. He added, "Regardless of the reason, the COVID-19 pandemic has resulted in substantially more deaths than would have otherwise occurred...and it is not over yet."

The Institute for Health Metrics and Evaluation at the University of Washington estimated that by year's end, COVID-19 deaths could reach 378,000 in the country.

Hai Do wrote this story for VOA Learning English with reporting from Reuters, the Associated Press and other sources. Mario Ritter Jr. was the editor.

grieving –v. to feel or show great sadness or loss

adjusting –v. to change in order to do better in a new situation

pandemic –n. a situation in which an infectious disease spreads quickly over a very large area or over much of the world

substantially –adv. by very much or a lot